Skip to content
Home
/
2010
/
November
/
5
/
Abu Hamza
/
ABU HAMZA THE HOOK WINS APPEAL TO STAY ON THE PUBLIC’S DOLE…….
Facebook
Twitter
Google+
LinkedIn
Pinterest
This is so wrong on so many levels, that one is hard pressed to know where to begin. It’s safe to say however that this creep should have never been allowed to set foot in the UK, or any other Western state for that matter, but at the least, deported from the UK in light of his terrorist activities. And the Home Office at one time banned Geert Wilders and still do, radio talk show host, Michael Savage, from entry, but this piece of human garbage is allowed to stay, and on the backs of the UK taxpayers. Sickening isn’t it?  KGS 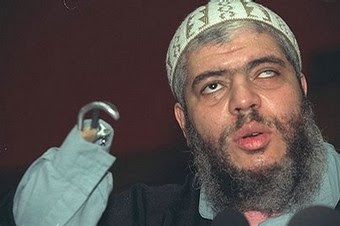