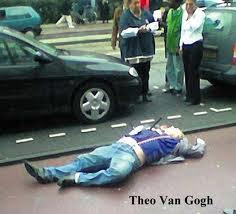 The Tundra Tabloids apologizes for missing yesterday’s sad anniversary of the slaying of Dutchman, Theo Van Gogh. The man was targeted by a Muslim fundamentalist Mohammed Bouyer while riding his bicycle, for his role in producing the film “Submission”, a critical documentary on Islam and the role it plays in dehumanizing women. KGS

In a gruesome coup de grace, Bouyeri ended his attack by sticking a knife into Van Gogh’s chest with a message threatening other Dutch politicians. He is presently serving a life sentence and has expressed no remorse for his act and told the court he would do it again if he could.

The brutal murder of Van Gogh shocked Holland, sowed fear among critics of Islam who rightly saw the act as an assault on freedom of expression. Since the film maker’s murder, Dutch politician Geert Wilders and numerous other outspoken critics of Islam have been threatened with death by the still enraged Islamists. In the case of Wilders, he has been forced to have 24 hour security and is constantly looking over his shoulder as a result.

In a stark testimony to Europe’s civilizational crisis, Wilders is currently on trial for “insulting Islam” after Muslims browbeat the government into prosecuting him. The trial is a reminder of how freedom of expression is being curtailed in Holland and elsewhere by Islamists six years after the Van Gogh murder.

Today a small group of people gathered at the place where Theo van Gogh was murdered and held a minute of silence while laying flowers at the site.

The memorial was organized by the Foundation Pim Fortuyn, the Dutch politician who was murdered by an animal rights activist who objected to his criticism of Islam. .

Another memorial will be held later in the day at the sculpture “The Scream” [motivated by Edvard Munch’s 1893 famous painting of the same name] which was erected to commemorate Van Gogh in the park next to where he was murdered.