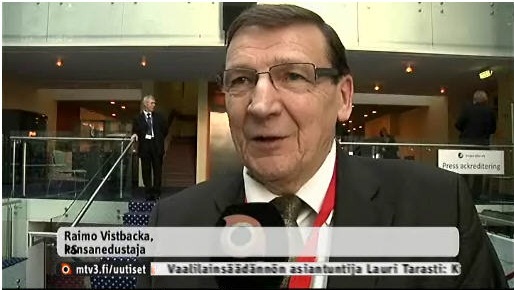 Raimo Vistbacka: Oh, but they reminded me on
the way out that it wasn’t anything personal
This is how politics work in the social democracies of Europe, when you belong to a party that threatens the voter base of the established parties because you’re working against their policies that the people reject, don’t believe for a moment that you’ll be allowed to participate with them in international meetings, let alone on an equal footing. This was engineered by the Center Party with a wink and a nod from the SDP and National Coalition. KGS
Vistabacka approaches from the rear,
mulling over where to plant his shoe 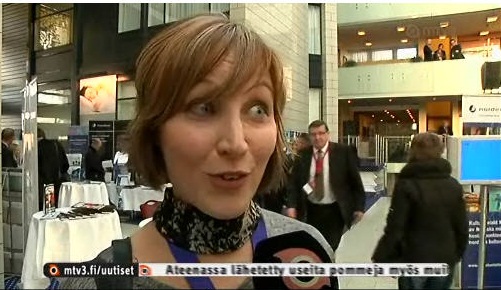 Terhi Tikkala: Vistback was evicted,
but I’m just the one who pointed the finger
True Finns representative evicted from the Nordic Council meeting

The backdrop according to the Secretary-General of the group, is the right-wing assault of populist parties in Finland and Sweden.

– I went to the normal Central Group meeting, and there was little surprise to me. I was told of the decision that I do not belong to the middle groups in such a way that I can participate in the meeting, said a surprised Vistbacka.

Vistbacka’s being kicked out began in the morning at the behest of the Nordic Council Central Groups Secretary, Terhi Tikkala. Tikkala says she acted only as an “alarm clock” about Vistbacka.

– No one can say that it was just my initiative. Sure, there were broader considerations behind the scene, Tikkala commented.

Central Group, however, quickly had second thoughts and tried to Vistbacka back into the group.

– The group wanted to show that it was not a personal criticism against the him in any way. We wanted to invite him as guest of the meeting, Tikkala says.

Vistbacka, however, did not return to the site.

– It went for a walk after they sent me out. I no longer wanted at that stage to go back to the group.

Case of an electoral game?

Although Prime Minister Mari Kiviniemi, a few weeks ago, warned against election campaign starting too early, such as seems it’s already in full swing – and even outside the country.

– I think it’s their 14.3 percent behind the polls, Vistbacka says, referring to the True Finns’ rapid growth of support.