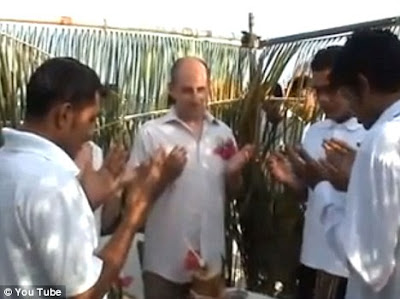 Dhimmis being made fools of
What were they thinking in the first place, renewing their vows by a Mohammedan in a language they couldn’t understand? Recipe for disaster. KGS

A luxury resort in the Maldives has sparked outrage after a video appeared on You Tube showing members of staff abusing and mocking their guests using a language they were unable to understand.

Employees at the Vilu Reef Beach and Spa resort can be seen calling an English-speaking couple ‘infidel’ and ‘swine’ and calling their guests’ marriage illegal in their native Dhivehi tongue throughout the 15-minute wedding ceremony.

According to the Maldive news service Minivan News, the video which was uploaded to You Tube ‘as a joke’ shows an employee named Hussein Didi conducting a service as a ‘celebrant’ – a person who is empowered to perform a religious ceremony.

The document he uses, of which there is a brief close-up in the video, has absolutely no relation to marriage laws in the Maldives. Words that are legible on the document refer to ‘staff employment’, suggesting that it is a document relating to employment regulations.

Asking the couple and other ‘officials’ to raise their hands as is customary for Muslim prayers, the ‘celebrant’ begins his marriage vows.

‘Fornication has been legalised according to Article six, 1.11 of the Penal Code’, he chants in a tone favoured by religious scholars. ‘That is, frequent fornication by homosexuals. Most fornication is by males,’ he continues.

‘You are swine. The children that you bear from this marriage will all be bastard swine,’ he says to his guests.

‘Your marriage is not a valid one. You are not the kind of people who can have a valid marriage. One of you is an infidel. The other, too, is an infidel – and we have reason to believe – an atheist, who does not even believe in an infidel religion.’

The hapless couple remain oblivious as the ‘celebrant’, surrounded by 10-15 employees, calls for the marriage to be enshrined in Islamic law, followed by further personal insults against the couple.

None of the employees attempts to stop the ‘ceremony’ and several take photographs.

Various types of insults about the woman and the man, their clothing and demeanour, are spoken throughout in the form of a running commentary in a sports video.

The woman speak English, largely just in reply to the ‘officials’, and it appears from the video that their surname is Alexander, although one news agency maintains they are Swiss.

As the bride bends down to plant the coconut tree, a man is heard is exclaiming: ‘Can see her breasts!’ The ‘commentator’ observes: ‘She is wearing something’, he knows, he says, ‘because my beard has gone grey watching those things… I have seen so many of them now that I don’t even want to look any more when I see them.’

A police investigation has been launched into the incident while management at the resort have said that the employees have been sacked and evicted from the resort altogether.

But the resort admitted that it does not have a person who is specifically designated to perform the rituals.