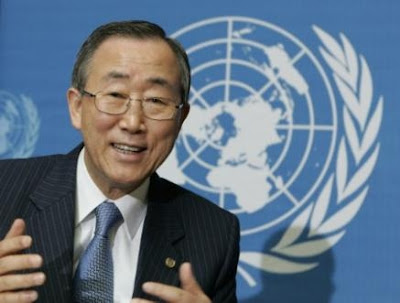 Ban Ki-Moon: If only the UNSC had listened
to the Tundra Tabloids

The Tundra Tabloids called it the day UNSCR 1701 was agreed upon by the UN’s Security Council, and thereafter, (here too) in 2006 the TT stated:

“This is politics pure and simple, and no western state, even the US, wants to do the badly needed work of ending the military strength of Hezbollah, “on the ground”. This would also have to include more UN resolutions, that not only threated Iran with sanctions, but Syria as well, to stop the flow of weaponry that will soon be making its way to the Bekaa valley. The Hezbollah will not believe the game is over, until their paymasters in Tehran and Damascus believe its over as well. UNSC 1701 looks just as nice as did UNSC 1559, and both are already decorating the wall of Hassan Nasrallah’s new office space. KGS”

Any astute observer to the Arabs’ ongoing conflict with Israel, knows fully well that the Arabs will continue to do whatever they like, with little fear that the UNSC will actually hold them accountable, (unless one or two of the five members on the council takes unilateral action like in Iraq). So when UNSCR 1701 became ratified in the council, and everyone else breathed a sigh of relief, the Tundra Tabloids stated then that the resolution, absent of teeth, merely kicks the can down the road. Now we see Ban Ki-Moon picking it up and wondering what to do about it now. KGS

UN chief says militias operating in country outside of gov’t control; calls on Shi’ite group to lay down arms and act solely as political party; Hariri tribune investigators chased away by crowd in Beirut.

UN Secretary-General Ban Ki-moon said in a report released Wednesday that he is concerned about Hizbullah in Lebanon having weapons and he believes the group should lay down its arms.

Ban said that both local and foreign militias, that are not subject to government control, are active in Lebanon.

The UN chief added that only political action within Lebanon could disarm Hizbullah and other terrorist groups.

Ban called on Hizbullah to act solely as a political party with no military function.

Earlier Wednesday , A crowd in Beirut chased away a team of UN officials gathering evidence in the assassination of former Lebanese prime minister Rafik Hariri, scuffling with the investigators and shouting abuse before snatching a briefcase, police said.

Nobody was hurt in the melee, which underscored the charged emotions behind the international tribunal looking into the 2005 assassination. The Hague-based court said they are taking the incident seriously.

The tribunal has not yet indicted any suspects in the assassination, but speculation that the court could name members of Hizbullah has raised fears of violence between the heavily armed guerrilla force and Hariri’s mainly Sunni allies.

Wednesday’s incident happened at a clinic in Beirut’s southern suburb of Ouzai, a Hezbollah stronghold.

Dr. Iman Sharara, who runs the clinic, said two men — an Australian and a French national — showed up with a Lebanese interpreter for an appointment to go through some phone records.

When she went outside to speak to her secretary, she saw a large group of women force their way into the clinic, screaming and trampling on documents belonging to the clinic.

“It looked like a real battle,” she told reporters. “The investigators fled. The interpreter, they pulled her hair, they snatched things from them … I returned to my clinic, hid inside and called my husband.”

“I was shocked,” she added. “I have no idea how and why this happened.”

A police official said more than 30 women stormed the building, with another 75 or so remaining outside. He added, on condition of anonymity because he was not authorized to give official statements, that the crowd shouted curses at the tribunal and one protester stole an investigator’s briefcase.

It was not clear what was in the briefcase.