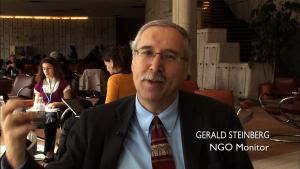 The only Jews that interests the EU, are the ones who openly demonize the Jewish state, there’s nothing more to it than that. The EU must placate their Arab oil suppliers, as well as stave off any interest in conducting acts of terrorism on the continent, so they continue to promote those Jews who hate Zionism, capitalism and the mythical imperialism of the Jewish state. To know these people are to loathe them. KGS

H/T NGO-Monitor
JERUSALEM (EJP)— A Jerusalem-based research organization denounced as “a major mistake” the choice of Israeli NGO ‘Breaking the Silence’ (BtS) as one of the three finalists for the European Parliament 2010 Sakharov Prize for Freedom of Thought awarded to defenders of human rights and other freedoms.
“This blatantly political act debases the memory of Nobel Laureate Andre Sakharov, a courageous and unfaltering human rights defender,” said NGO Monitor.
“BtS is a fringe Israeli political group funded by European governments, and this nomination is immoral and a gross abuse of the principles of human rights and freedom of expression,” according to Prof. Gerald Steinberg, president of NGO Monitor.
“Israel has one of the most open and vibrant democratic societies in the world. The members of this group do not promote human rights among Israelis and their audience is the international chorus seeking to demonize Israel and its defense against terror,” he said.
He continued: “Unfortunately, this is yet another example of European manipulation of Israeli political advocacy NGOs through secret funding. Last month the EU Parliament held a debate regarding a bill in the Israeli Knesset that would require NGO funding transparency. European officials should support transparency, rather than promoting anti-democratic processes.”
The Prize winner will be announced on Thursday in Strasbourg, France, by the President of the European Parliament, Jerzy Buzek.
The two other finalists are Cuban dissident Guillermo Farinas and Ethiopian opposition leader Birtukan Mideksa.