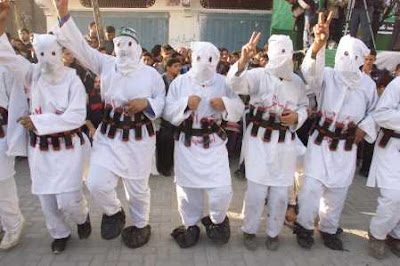 Boy what a shocker of a study, the more the US pushes the Jews to “make difficult choices”, the more those who will benefit from those “difficult choices” will seek to murder them who are making the “difficult choices”. Outside of the fact that the study reveals nothing new, what should be noteworthy is the fact that it’s taken for granted that if there’s going to be any “pressuring from Obama”, it’s going to be the on Jews, which is always the way it goes, no matter what US president sits in office, outside of Bush Jr. KGS
JPOST: A study of Palestinian social media commissioned by the Foundation for Defense of Democracies (FDD) highlights what it calls the “serious risks to Israeli security” that may occur should the US push too hard for a peace agreement.
The results were compiled from postings on various sites including Twitter, Youtube and other social media sources, and showcase a cross-section of views. These reflect, according to the study, the opinions of the Palestinian people, or at least, those who are computer literate.
The study, “Palestinian Pulse,” was conducted by Jonathan Schanzer and Mark Dubowitz, both employed by the FDD, and utilized ConStrat, a company that deploys military-grade technology on behalf of the US Central Command. Schanzer and Dubowitz said the following in an article on The National Interest:
“While polls are often designed to elicit specific responses, social media is largely free of outside manipulation. Most Palestinians write under pseudonyms, enabling them to discuss controversial issues without fear of retribution.” The overriding conclusion drawn from the 102 page report of the results was that “although the Palestinian web landscape is not devoid of users with moderate to liberal views, it is dominated by radicalism.”
More here.