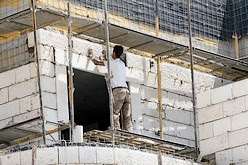 Do Jews Have Civil Rights?

A striking aspect of the so-called building freeze in Judea and Samaria that expired last week is that an enormous amount of construction went on throughout the last 10 months. The Arabs of Judea and Samaria were not only building without restrictions, the US, Europe and the Arab states of the Persian Gulf bankrolled much of their construction.
The presumptive purpose of the freeze was to prevent Israel from creating “facts on the ground” that would prejudice the outcome of the so-called peace talks with Fatah. This goal is justified on the basis of the Palestinian misinterpretation of a clause in the 1995 agreement between Israel and the PLO in which they agreed that “neither side shall initiate or take any step that will change the status of the West Bank and the Gaza Strip pending the outcome of the permanent status negotiations.”
The clause was never intended to refer to construction, and “neither side,” of course, relates to both Israel and the Palestinians.
But since the agreement was signed, while the Palestinian misinterpretation has been widely adopted, only one side has been held to account.
Whereas every Jewish home built since 1995 has evoked a storm of international criticism, the Palestinians have built thousands upon thousands of buildings throughout the areas. They have done so in total disregard for planning and zoning ordinances and even the basic considerations of supply and demand. For instance, a motorist travelling from Jerusalem to Ma’aleh Adumim will pass hundreds of empty five-story buildings in Issawiya and other Arab neighborhoods built for the sole purpose of preventing Israel from connecting the two.
So too, Fatah-appointed Palestinian Authority Prime Minister Salam Fayyad has been absolutely clear that the Palestinians are building the new city of Rawabi to “change the status” of Judea and Samaria and prepare the ground for the establishment of a state outside the framework of the negotiations.
As the Binyamin citizens’ committee has warned, the Palestinians chose to locate the new city in the heart of the predominantly Jewish area to undermine the territorial contiguity of the Jewish communities there.
The situation in Judea and Samaria at the end of the moratorium is not what the participants in the global anti-Israel pile-on would have us all believe. We do not have avaricious Jews gobbling up all available land at the expense of the guileless, disenfranchised Palestinians. And what is at stake with the end of the freeze is not the fate of the so-called peace process.
What we have is a situation in which there are two sets of rules – one for Arabs and one for Jews. Not only are Jews not given extraordinary rights, they are being denied what are supposed to be their inviolable rights to their private property. Not only are laws being enforced with great prejudice to the benefit of the Palestinians, they are being enforced with great prejudice against the Jews.
Read it all.