The Tundra Tabloids isn’t convinced, this woman is speaking in the most friendly way she can in order to win her friends freedom from that hell hole. KGS 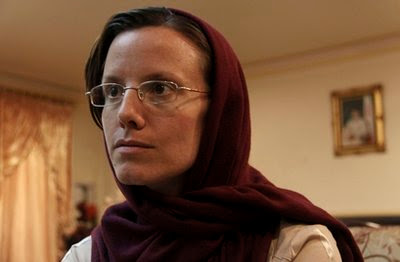 TEHRAN, Iran – The American woman released by Iran on Tuesday after more than a year in prison said she was grateful to Iran’s president for her freedom shortly before she boarded a flight to the Gulf sultanate of Oman where her mother greeted her with a warm embrace.
Iran freed Sarah Shourd, 32, after a $500,000 bail was paid to win her freedom. However, the case that has deepened strains between the U.S. and Iran was still far from resolved.
Shortly after announcing Shourd’s release, Iranian authorities said they are not considering the immediate release of the two Americans arrested with Shourd — her fiance Shane Bauer and their friend Josh Fattal. Iran has charged all three with spying, though their families say they were innocent hikers arrested in a scenic mountain area along Iran’s border with Iraq.
“I want to really offer my thanks to everyone in the world, all of the governments, all of the people, that have been involved, and especially, particularly want to address President Ahmadinejad and all of the Iranian officials, the religious leaders, and thank them for this humanitarian gesture,” Shourd told Iran’s English-language Press TV at the airport before she flew out.