Skip to content
Home
/
2010
/
September
/
13
/
Uncategorized
/
US POISED TO MAKE BIGGEST WEAPONS DEAL WORTH 60 BILLION WITH THE SAUDIS…….
Facebook
Twitter
Google+
LinkedIn
Pinterest
The next time someone whispers in your ear about the “Jewish lobby”, remember this story, for no doubt, because possibly this mega deal, as well as other deals in the past went against Israel’s best interests, will go through through nonetheless. This is very bad news for Israel if it goes through, as well as for the West. We don’t need the Mohammedan pouring over all the technical wonders the West has to offer. KGS
Obama, the master of disaster 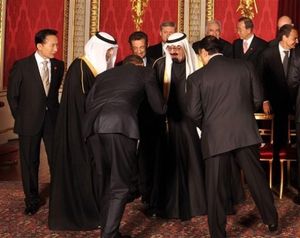