Skip to content
Home
/
2010
/
September
/
8
/
Uncategorized
/
FLASHBACK: US MILITARY DESTROYED BIBLES MEANT FOR FUTURE AFGHAN CONVERTS…….
Facebook
Twitter
Google+
LinkedIn
Pinterest
Hey, when it’s Christian Bibles, it’s OK to burn them! The brouhaha over US military members who were given Bibles to hand out to potential Christian converts in Afghanistan, erupted over a year ago, after a story in al-Jizz was released showing US soldiers praying and talking about conversions of Afghanis.
The reaction was swift, the military confiscated them all and had them burnt, and imagine that, Christians weren’t seen rioting in the streets demanding the guilty parties to be beheaded. So now a pastor wants to do the same, and the military, (read = Gen.Petraeus) cries foul. KGS 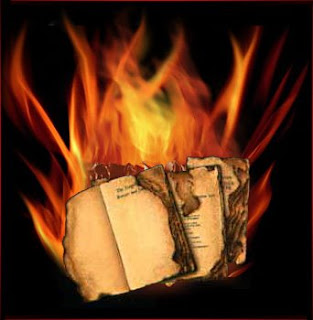 The Bibles were printed in the local Pashto and Dari languages. Military rules forbid proselytizing. By the way, the Bibles were burned because the rules on the base say that all garbage is burned at the end of the day. But just asking here; if the U.S. Military seized a stack full of Korans, would they be burned? You think that might cause a little outrage in the Muslim world