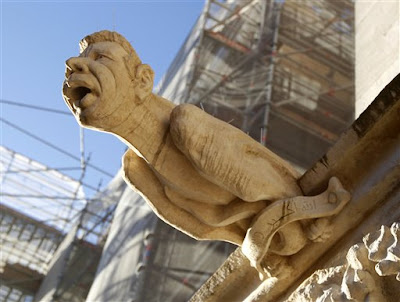 It’s not the likeness that’s a problem, tradition demands that the sculptor be honored in some way, what’s the problem is that “allah is great” is stamped on it. Islamic supremacists will have reason to be proud of their Christian dhimmis who dutifully bow towards Islam, once again, intentionally or not. Disgusting. 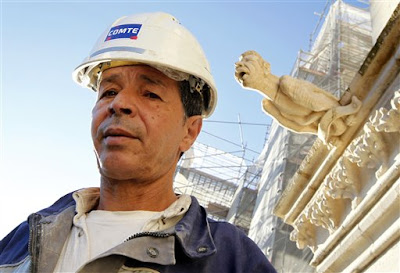 PARIS (AP) – A Muslim stone mason who spent nearly four decades helping to restore an ancient Roman Catholic cathedral has been immortalized, as a winged gargoyle peering from the facade of the edifice with the inscription “God is Great” at his clawed feet.
This sign of friendship that spans religions is rooted in the Medieval tradition and the city of Lyon’s links to its large Muslim population. But a widely publicized outcry from a tiny extreme-right group has forced the diocese into damage control.
“This has nothing to do with religion. It’s a sculptor who wants to pay homage to a construction site chief,” said Michel Cacaud, rector of the cathedral. “That’s all.”
[…]
The Benzizine gargoyle has been in place for some six months, but until recently, few people noticed. However, a recent campaign by a small extreme-right group denouncing the likeness of a Muslim on a Catholic institution and the inscription proclaiming “God is Great” in French and Arabic—Dieu est grand, Allahu Akbar—has put everyone on the defensive, even Benzizine.
“Just the fact that it’s written in Arabic, it shocked a minority,” because it evokes Islam, he said. But, Benzizine insisted, “God IS great. It’s not talking about Mohammed,” the Muslim prophet and founder of the Islamic faith. He noted that he works on all historic monuments, be they cathedrals, mosques or synagogues.
The extreme-right group, Identity Youth of Lyon, said on its website that the “clearly symbolic” inscription is “the manifestation of a conquering Islam.”
“How many Ave Marias are inscribed on how many mosques?” it asked