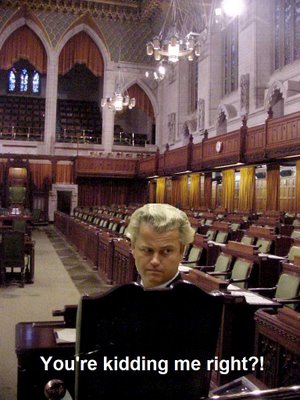 This is not unlike the anti-democratic cordon sanitaire Belgians have formed against the Vlaams Belang. Once again the wishes of the people are ignored by the ruling elite with their representative politicians forced into the ranks of the opposition. The Baron has the details. KGS

The Romance is Over

by Baron Bodissey
For the last few weeks, Geert Wilders’ party (De Partij Voor de Vrijheid, or PVV) has been negotiating with the two “center-right” parties, the VVD and the CDA, on the formation of a minority governing coalition. The idea has been that a CDA/VVD coalition would enjoy PVV support, thereby allowing it to govern.
While negotiations dragged on, the PVV’s popularity in the Netherlands has increased. The most recent polls show it gaining as many as seven seats if elections were to be held again, going from 24 to 31. In some polls it is the most popular party in the country.
This has given Mr. Wilders and his party a very strong negotiating position. But now comes word that the negotiations for a government have failed, and have been called off. Our Flemish correspondent VH has translated the latest from Elsevier:

Wilders: The trust in the CDA has hit rock bottom
by Marlou Visser
The lack of confidence in the CDA [Christian Democrats] has led the PVV to stop the formation of a right wing cabinet. PVV leader Geert Wilders says he deeply regrets this, but now becomes the opposition leader. Wilders announced this at a news conference on Friday, September 3.
Wilders offered the CDA parliamentary leader Maxime Verhagen a compromise. If Verhagen would ensure that the three dissidents within the CDA Group, Ab Klink, Kathleen Ferrier and Ad Koppejan, would accept a “yes” by the CDA congress as binding, and otherwise would leave, Wilders would still continue with the formation [of a government]. This guarantee Verhagen could [or would] not give, after which the information negotiations failed.