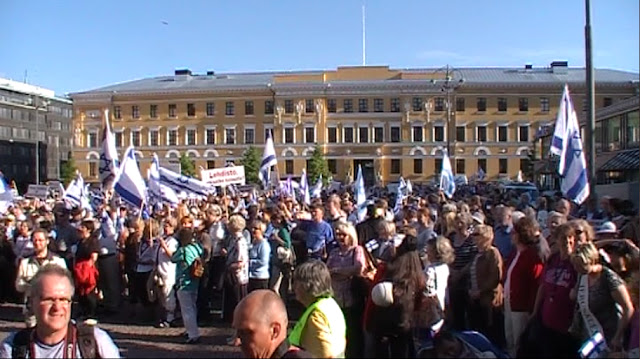 Even after all the brain washing attempts by the leftist Finnish lame stream media, Finns reject getting bogged down with the Islamonazis of Gaza. Perhaps it’s the rejection of Maoism by the average Finn that keeps them from imitating their Scandinavian drone neighbors in Sweden and in Norway. KGS
[“The reporting was distorted. I’m not here to incite violence, but I am demanding that the point of view of both sides should come out”, said Simon Elo from Espoo. One of the demonstrators, Kaija Patrikainen, who had lived in Israel for 18 years, criticised Helsingin Sanomat for biased reporting, and defended the embargo on Gaza. “When I lived in Israel, bombs were constantly falling near the Gaza security fence. ]

Helsingin Sanomat: NEWS ANALYSIS: Gaza’s cause is not ours

In the 1970s, Palestine was overshadowed by Moscow-approved peace projects
By Miska Rantanen
The voyage of an aid flotilla of six ships to Gaza was suddenly cut off on Monday, when Israeli special forces clashed with Gaza activists. The aftermath was ugly.  according to official information, ten activists (TT: jihadis) were killed, and unofficial estimates put it as high as 20.
The attack was big news around the world, especially in the Nordic Countries, as there were eleven Swedes along in the convoy. They included Turkish-born Environment Party Parliamentarian Mehmet Kaplan, Ulf Carmesund, the international affairs secretary of the Christian Democratic Party, Mattias Gardell, professor of religious history, and his wife, historian Edda Manga, and renowned paediatrician Henry Asher.
Researchers, doctors, academics of the humanities – prestigious leftist intellectuals of different ages. Couldn’t there have been just one representative of the Finnish intelligentsia? Apparently not. Today very few in Finland have taken up the Palestinian cause as their own.