Skip to content
Home
/
2010
/
June
/
12
/
Uncategorized
/
IN HELSINKI: A HANDFUL OF MARXISTS AND MUSLIMS CONVERGE IN PATHETIC PROTEST AGAINST ISRAEL…….
Facebook
Twitter
Google+
LinkedIn
Pinterest
A pathetic group of leftist loons and moronic mohammedan maroons assembled yesterday to show their support for the genocidal Hamas and other anti-Semites, and hardly anyone bothered to show up or to watch. 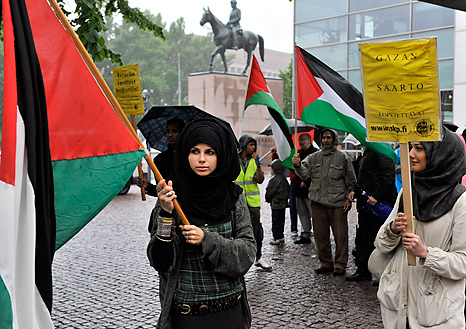 The “muslima” on the right holds a sign from the Finnish Communist skp.fi, which shouldn’t surprise anyone, any more, since the convergence of the Left with the Muslims has been well documented.
Both groups of these utopians have no problem juggling the cognitive dissonance that goes on in their mushy brains from their alliance, since being anti-Capitalist, anti-West and anti-Israel and anti-Jew is the glue that binds and holds these two sides togther.
Hitler’s Socialist Dreams: Adolf Hitler during a party speech in Munich, August 1920, “How, as a socialist, can you not be an anti-Semite?”

A demonstration against the Israeli blockade of Gaza, was conducted in front of the Kiasma museum in Helsinki on Friday.
Slightly more than one hundred demonstrators in Helsinki on Friday demanded from the State of Finland, concrete deeds to put pressure on Israel. It started from the Gallery Kiasma and finished at the Israeli Embassy, the protest went peacefully, police said.
The demonstration, organized by the Arab Peoples Friendship Society, the Palestinian Diaspora society and the Left Youth Association.
Last week Tuesday, Israel’s action against the aid ship attempting to reach Gaza was objected to by nearly 900 people in Helsinki.
On Thursday, a march in favor of Israel attracted up to 2000 participants.