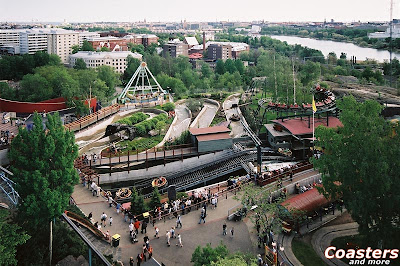 The Tundra Tabloids was half right, Somalis were involved in the brawl this past Sunday at the amusement park called Linnanmäki. Somalis are trying to clamp down on Kurds who are seen as flouting Islamic dress codes, so the cutting into the lines was a ‘BS’ pro-immigration comment.
The intial report was that the brawl started due to line cutting is proving to have the consistency of helium, it’s all about enforcing sharia law on the less observant Kurd community. What then resulted from this simmering fued between the two communities can be described as a brawl between competing Muslim camps, Alien vs. Predator perhaps? KGS

Linnanmäki Disturbance Highlights Tensions between Somalis and Kurds in Finland

Representatives of two immigrant minorities believed to have been involved in Sunday’s group fight at Linnanmäki have sharply condemned the melee. The incident has highlighted tensions that sometimes emerge between Somalis and Kurds in Finland. Some Somalis have taken issue with the dress and habits of Kurds, who are often fairly relaxed in their interpretation of Islam.
Dozens of young people with immigrant backgrounds took part in Sunday’s melee – mainly Somalis and Kurds. Kurds have said that there have been tensions between the groups before, because some of the Somalis, many of whom are devout Muslims, have been known to chide Kurds for their more worldly dress and behaviour.
A woman, interviewed by the late-edition newspaper Ilta-Sanomat, said that one of Sunday’s fights started with an argument over the use of head scarves. According to the 25-year-old woman, the Somalis denounced Kurdish women for not wearing scarves.
Kurds interviewed by YLE were not surprised to hear about tensions with the Somalis. They say that some Somalis have previously taken issue with the habits of secularised Muslims. One Kurdish woman spoke of an incident in which a Somali took issue with listening to music at a Finnish language course.
“When I was on a Finnish language course, we had the same problem. One Somali prevented us from listening to music, saying that it is banned under Islamic law.”
The woman did not want her name mentioned, because she did not want to hurt the feelings of her Somali colleagues.
Friendship Society Condemns Violence
Sabah Abbas Ali, the chair of the Finnish-Kurdish Friendship Society, says that there have been similar cases before.
“Unfortunately, this is not unique. What happened at Linnanmäki has happened before.”
Ali mentions a case at a public swimming pool in Vuosaari, where a bikini worn by a Kurdish woman sparked a conflict. Ali is occasionally told of cases in which a devout Muslim will take issue with the dress or activities of a worldlier Kurd.
“Both sides have behaved badly,” Ali said, commenting on Sunday’s news.
Ali is quick to add that not all Somalis in Finland take issue with the religious habits of other Muslims, adding that he has close Somali friends himself.
“More about Self-Esteem than Scarves”
Youth worker Mohamed Xadar Mukhtar Abdi, himself of a Somali background, is surprised at the experiences reported by Kurds.
“Muslim girls have been friends with each other even though some wear scarves and others do not. I think that they have gotten along quite well in spite of this.”
Abdi believes that Sunday’s events were more about self-esteem and adherence to a group than about head scarves. He noted that stupid ideas tend to prevail in large groups.
“If two people do not understand each other, then naturally.