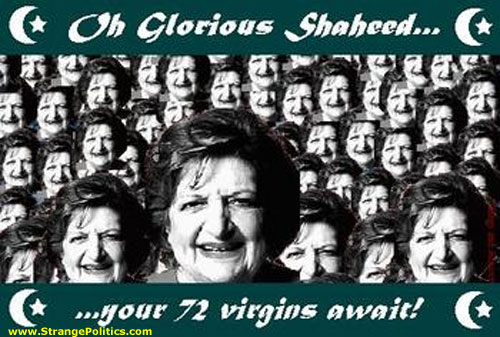 Helen Thomas has nothing to say about the 1 million plus Mizrahi*/Sephardic Jews who were from Arab lands until they were shoved out. No, she hasn’t anything to say about these Jews, she buys into the myth that all Israelis are European Ashkenazi Jews. What an anti-Semite, and to think that turd was/is given front row seats to all the WH press conferences.
The Left will say she’s just getting too old and “slipped”, but what happened is her imagined protected status (read = arrogance) got the best of her and she let her mask drop. KGS

Iconic White House reporter Helen Thomas was dropped by her speaking agency and booted as a high school commencement speaker Sunday following inflammatory remarks she made about Jews and Israel.
Although Thomas apologized, Nine Speakers Inc. dumped the octogenarian journalist over her videotaped declaration that Jews should “get the hell out of Palestine” and go back to Germany and Poland.
The principal of Walt Whitman High School in Bethesda, Md., said in an e-mail to students and parents yesterday that next Monday’s speech was canceled, saying “graduation celebrations are not the venue for divisiveness.”

NOTE: *Special thanks to Dallas for reminding the TT about “Mizrahi” Jews.