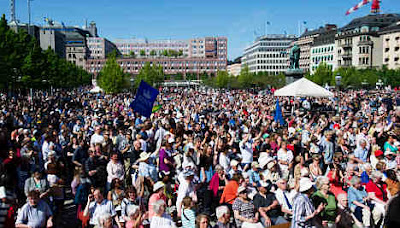 Swedes should be embracing its Christian community, because this is the alternative. KGS

The Local: Christian bikers were among the crowds pouring into Stockholm on Saturday for the third annual “Jesus Manifestation”, as some 25,000 people took part in a religious service in the city centre.
With their weather-worn leather jackets, untended beards and multifarious tattoos, the bikers rolled into the capital with the sun in their faces and Jesus Christ on their mind. Patches on the backs of their jackets revealed the start point of their journey or the nature of their mission: Nights of Heaven Kronoberg, Streetchurch Bikers, The Salvation Riders.
Thomas Gustafsson parked his Honda CB1300 by the square at Kungsträdgården after riding up from Linköping. He had just come from a blessing ceremony at Rålambshov park where bikers and ex-criminals praised Jesus in the breaks between musical acts. After the ceremony, they mounted their bikes and thundered along the waterfront on Norr Mälarstrand.
“It was a powerful feeling,” said Gustafsson.
It was the third time the ”Jesus Manifestation” was held in Stockholm. Last year 18,000 people participated in the event, but organizers were expecting at least 25,000 this time round.
More here.