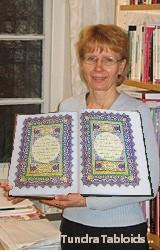 “If someone in America bombs an abortion clinic or kill abortion doctors, no one will ask us how can you Christians you do something like that,” states Sakaranaho. “You can’t blame me for what another person does. But that’s the way the idea works, that every Muslim is responsible for what every other Muslim does in the world”.

What a disingenuous statement. This is the kind of moronic mumbo jumbo one has learned to expect from these over paid and under worked academics who leach off society at the Finnish taxpayers’ expence. The woman is a disgrace. The woman hasn’t a clue about how expansionist Islam is, nor of the countless statements by Islamic leaders about how their numbers are going to finally tip the scales in Europe.
Anyone who follows the debate on Islam knows that the discussion surrounding mass immigration of Muslims into Europe touches on the raw fact that, Islam at its core, is a totalitarian ideology and that the majority of the Muslim people coming into Europe, identify more strongly with Islam than with the culture of the host society.
It’s a fact. No matter how many of these academics will try sticking lipstick on a pig, the fact remains, an alarming percentage of Muslims support sharia, will refuse to condemn Islamofascism and reject assimilating into the culture of the host society. Anywhere else this happens outside of the West, it’s called colonization and deemed bad, but when it happens in the West, it’s called multiculturalism and it’s all good.
Oh, and there’s more:

“The world has one and a half billion Muslims from Morocco to Indonesia, and most of them are ordinary people. They live in very different countries and cultures, speak different languages and have different ethnic customs and practices”. Nor one kind of Islam or Muslim.

It’s completely immaterial whether there are “mild” Muslims or not, the fact of their existence, even in (supposedly) larger numbers than of those who want to live under sharia law, does not change the fact that the Koran, Hadiths and the Sira remain unchanged, unchallenged, and that the teaching and direction coming from all four schools of Islamic jurisprudence, doesn’t differ in any great measure from teachings that the jihadis adhere to, and in many cases, dovetail.
So academics like Sakaranaho can bloviate all they want, when it’s all said and done, the famous quote of “While there are peaceful Muslims, there is no such thing as peaceful Islam”, still stands unchallenged. The only reasons why there are peaceful Muslims, is due to outside non-Islamic influences, like for some time in the Balkans, where Muslims drink alcohol and the women don’t wear the headscarf (until recently). It’s due to the imbalance of power and the inability for fundamental teachings of Islam to reach the area.
When there were direct Islamic interventions, look how easy it was for the Nazi’s Mufti, Hajj Amin al-Husseini to raise up Muslims for a few SS divisions to help with the slaughter of Europe’s Jews. Lets be realistic here, people confuse “mild” Muslims with Islam, the religion and political ideology. They wrongly assume that one automatically equals the other, that the “mild” Muslim they know, are mild because of Islam, but in reality, it’s due to non-Muslim influences from civilized societies, not from Islam. KGS
H/T: Vasarahammer