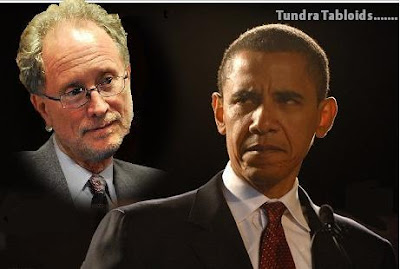 Bill Ayers: Be patient Barack, just a little bit more time and
we’ll be successful in the complete gutting of the United States
Why should that surprise us? Obama has had radical Leftist terrorist Bill ‘F’ the US Ayers as a guest at the White House five time already since becoming president. This happens to be the most radical US president in the history of the United States, something of which the talking heads here in Finland fail to understand.
For an example, the Tundra Tabloids was watching two morning programs on Finnish tv today, where two “experts” from the Finnish state department’s foreign policy think tank research center the, UPI, or FIIA, pontificated on the recent foreign policy decisions of the Obama administration.
Obama’s decision to repeal the US’s decades old option to use nuke weapons against those (non-signers of treaties banning the use) who might use biological/chemical weapons against the American homeland, marks a drastic departure from the policies set in stone since the 60’s or 70’s. Here it barely raised an eyebrow.
Anyways,.. though Finns traditionally refrain from open displays of narcissistic self promotion, and view the phenomenon of Americans slobbering over Obama during the recent election process as “American”, Barack Obama is still considered something of a star here in Finland, whose politics are basically indistinguishable from the Europeans. So by default, the Mao worshipping Valerie Jarrett would be considered something of a great political advisor as well. KGS
Valerie Jarrett: Obama’s New Nuclear Advisor?

The last time that President Obama’s senior advisor and assistant Valerie Jarrett was in the news, her favored political recruit, Anthony “Van” Jones, was resigning his post as White House presidential advisor amid revelations of a radical background that included communist sympathies and his support for 9/11 Truther conspiracy. Now Jarrett, widely viewed as Obama’s radical alter ego, has reemerged – this time as a foreign policy guru.
As Obama and Russian President Medvedev signed a new nuclear arms treaty last week, Jarrett sat observing nearby. That Jarrett has once again found herself in a position of influence is not surprising. Jarrett proudly acknowledges her remarkable closeness to President Obama. “We have kind of a mind meld” is the way she put it in a New York Times magazine interview last summer. “When senior staff meetings in the Oval Office break up, Valerie Jarrett often stays behind” with the President, the Times article reported. In short, Jarrett is like a member of the Obama family, but one who has seized command of a variety of policies at the White House.
Although neither elected, nor confirmed, nor even vetted, and without previous Washington experience, Jarrett has been installed as senior adviser and assistant to the president for intergovernmental and public engagement. She also was given the recently created Office of Urban Affairs, even though we have a cabinet member who is Secretary of Housing and Urban Development. Now it appears she is involved in our nation’s foreign policy.