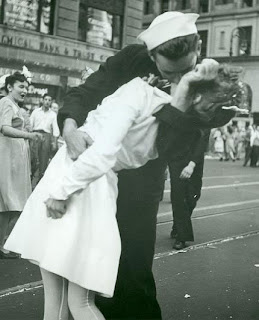 A kiss is just kiss……..
Islamic sharia controls every aspect of your life, if the the above picture were taken in Saudi Arabia, the “guilty couple” would have been immediately arrested, and the woman flogged or worse, because she didn’t even know the man she was kissing. The Tundra Tabloids recently recieved an email by an Israeli who follows the TT, who offered this bit of warning to Europe’s Christians:

What is so surprising to me is that the mainstream Christians do not seem to have any idea of their future within the ever more influental muslim population in Europe. They don’t seem to have a clue, how the Saudis sponsored this, in business terms, a hostile take over. Christianity will have the same status in Europe that it has today in Saudi-Arabia. Are you sure you want to check out this option?
When you look at the age profile of the general European population compared to the Muslim population in Europe, the turn over to a Muslim society will be much faster than the general population can anticipate or even imagine. This Malmo meltdown phenomenon will happen in more and more European big cities. When the big cities are in Muslim hands, the rest is peanuts.

It’s warning to all of the Tundra Tabloids’ Christian and Jewish friends, and to any other religious or non-religious demographic groups. If you do not take political action, demanding for the end to mass Muslim immigration into Europe, as well as demanding that everyone is subject to the same law of the land, then the writing of Europe’s future is literally on the wall.
You, yourself must get active, start a blog, talk to your friends and family, educate those around you to the situation at hand, get them interested in free speech issues, demand from your politicians smart immigration policies and a no nonsense approach to defending free speech. Demand that they say NO to sharia.
Criticizing Islam is not racism, even making fun of it, especially because its followers demand otherwise, even to the extreme of promoting violence against those of us that do. Poking fun at Islam has to be done in order to toughen their skins to criticism. They must get used to the idea that we non-Muslims adhere to our own set of secular-civil rules, not to Islamic dictates.
We are an army of Davids in this fight, with each bearing a measure of the responsibility in enlightening the rest that are swimming around in a sea of complacency. Kissing in public is something every Muslim living in the West should be forced to see on a regular basis, so do so often, and by default, you’re helping the Counterjihad. KGS

There Is No Fun In Islam* Alert: (FM: Jihad Watch)

A British couple jailed in Dubai for kissing in public have lost their appeal against their conviction.
Ayman Najafi, 24, and Charlotte Adams, 25, were sentenced to a month in prison with subsequent deportation and fined about £200 for drinking alcohol.
The couple were arrested in November after a local woman accused them of breaking the country’s decency laws by kissing on the mouth in a restaurant.
The pair said they would make a second appeal against the judge’s decision.
The couple decided not to start their sentence immediately, but the Dubai authorities are holding their passports so they are unable to return to Britain.
The initial complaint against them was made by a 38-year-old woman who said she was offended by their behaviour at the Jumeirah Beach Residence, where she was dining with her daughter.
The couple’s defence lawyers said the woman – who did not appear in court – had not seen the kiss herself, but had been told by her two-year-old child that the girl had seen the couple kissing….
They were fined 1000 dirhams, which is about £200….
Professor John Strawson, an expert in Islamic law, told BBC Radio 5 Live he was not surprised by the judge’s decision.
He said: “The problem in this particular case is that one of the British citizens is of Muslim origin.