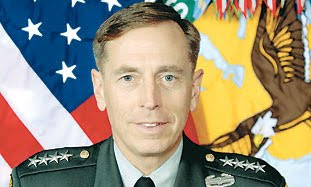 Gen.David Petraeus
There’s a reason why the Tundra Tabloids didn’t immediately leap to report on the story that was creating a buzz around the blogosphere, about US Gen.David Petraeus supposedly dissing Israel as a major contributor to the US’s sour image in the ME, due to its supposed intransigence.
The TT’s wisdom paid off. Gen.Petraeus speaks to the J’lem Post and offers a candid view over the brouhaha that was given steam by the Obama administration and spread by both Leftist media and Leftist blogosphere who are more than ready and willing to throw Israel under the bus. Thanks to Gen.Petraeus for clearing that issue up. KGS
NOTE: Talking of Arab preceptions isn’t the same as believing them to be true.

Gen. David Petraeus, commander of the US Military’s Central Command (CENTCOM), telephoned IDF Chief of General Staff Lt.-Gen. Gabi Ashkenazi on Wednesday night to reassure Israel that comments attributed to him regarding supposed Israeli intransigence were spun out of context.
Last week, Petraeus testified before the Senate’s Armed Services Committee. A 56-page report that CENTCOM had submitted alongside Petraeus’s oral testimony caused a storm by claiming that Israeli intransigence was a problem for the US military and was fomenting conflict in the Middle East.
“The enduring hostilities between Israel and some of its neighbors present distinct challenges to our ability to advance our interests,” the CENTCOM report read. “Arab anger over the Palestinian question limits the strength and depth of US partnerships with governments and peoples in the [Middle East] and weakens the legitimacy of moderate regimes in the Arab world.”
The above words, which appeared in the report but were not uttered by Petraeus in his oral testimony, were pounced upon by critics of Israel as confirmation of what many of them have said for years – that Israel is the source of instability in the region.
On Wednesday, though, Petraeus poured cold water on the written testimony. In an appearance at St. Anselm College in Goffstown, New Hampshire, he told reporters that his testimony had been spun by bloggers.
“There’s a 56-page document that we submitted that has a statement in it that describes various factors that influence the strategic context in which we operate, and among those we listed the Mideast peace process,” he said, according to a transcript of the press conference that appeared on the Web site of The American Spectator monthly. “We noted in there that there was a perception at times that America sides with Israel and so forth. And I mean, that is a perception. It is there. I don’t think that’s disputable. But I think people inferred from what that said and then repeated it a couple of times and bloggers picked it up and spun it. And I think that has been unhelpful, frankly.”
The report, he continued, included additional “perceptions” in the Middle East, which falls within CENTCOM’s area of responsibility, including the fact that Iranian President Mahmoud Ahmadinejad denies both the Holocaust and Israel’s right to exist.
“So we have all the factors in there, but this is just one, and it was pulled out of this 56-page document, which was not what I read to the Senate at all,” he said.
During the brief press conference and following a question by American Spectator reporter Philip Klein, Petraeus revealed that he had called the IDF chief of General Staff, whom he referred to as “Gabi,” and reassured him that the reports were inaccurate.
The IDF Spokesman’s Office confirmed that the two men had spoken and officials said that the fact that Petraeus referred to Ashkenazi as “Gabi” was likely a sign of the close ties between the generals.
Following the reports that emerged last week, Israeli defense official expressed grave concern regarding the remarks attributed to Petraeus, warning that they could presage a downturn in Israeli-US military ties. Officials said on Thursday that it was possible that the remarks, attributed to Petraeus, who has been touted as a Republican candidate in the 2012 presidential election, were purposely blown out of context by the Obama administration.