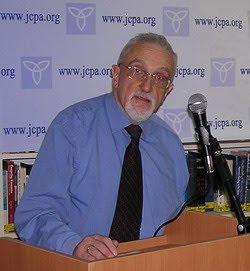 Here is a presentation given by Dr.Manfred Gerstenfeld from the Jerusalem Center for Public Affairs, at a press conference in Norway for his book “Anti-Semitism in Norway”. For those of you who have followed the Tundra Tabloids’ coverage of the outbursts of anti-Semitism/anti-Israelism in Norway, this new book by Dr.Gerstenfeld (in Norwegian) captures these events and the Norwegian political elite’s responses to them. KGS
PRESS CONFERENCE IN OSLO, 24 March 2010
Manfred Gerstenfeld