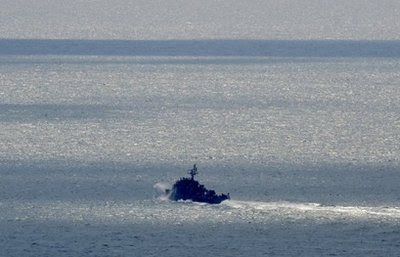 S.Korea hit by the North

This does not bode well for the near future, we might be witnessing Korean peninsula edging towards the brink of disaster. What will be Obama’s response…..call for sanctions, bed wetting? KGS

UPDATE: S.Korea now downplaying “But the presidential office was quoted later as saying the chances the North was directly involved was “small.”

SEOUL (Reuters) – A South Korean naval vessel with more than 100 aboard was sinking on Friday in waters near North Korea and Seoul was investigating whether it was hit in a torpedo attack by the North, South Korean media said.
Broadcaster SBS said many South Korean sailors on the stricken vessel were feared dead.
South Korea’s YTN TV network said the government was investigating whether the sinking was due to a torpedo attack by the North, and Yonhap news agency said the Seoul government had convened an emergency meeting of security-related ministers.
Yonhap also reported a South Korean navy ship firing toward an unidentified vessel to the north.
North Korea in recent weeks has said it was bolstering its defenses in response to joint South Korean-U.S. military drills that were held this month.
(Reporting by Cho Mee-young and Jon Herskovitz; Writing by Alex Richardson; Editing by Raju Gopalakrishnan)