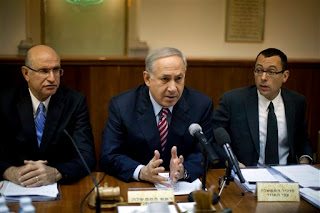 PM Netanyahu: Don’t tell us where to live,
and we won’t tell you where to go
Israel: East Jerusalem construction to continue

JERUSALEM (al-AP) – Israeli Prime Minister Benjamin Netanyahu said Sunday he would not restrict construction in east Jerusalem, a step requested by the U.S., but would upgrade upcoming indirect talks with the Palestinians to include the main issues dividing them.
Netanyahu originally had wanted to put off a discussion of issues like the status of contested east Jerusalem, final borders and the fate of Palestinian refugees until direct talks are launched.

[TT: Neither should he worry about what others say of a Jew building a home in Jerusalem, or anywhere else for that matter. Only the ignorant, the ideologically motivated and the antisemites say differently, and the TT could care less what they think. Besides, they have no hope whatsoever in proving their case.]

It was not clear what Netanyahu’s declared refusal to budge on east Jerusalem—the territory whose fate lies at the crux of the Israeli-Palestinian conflict—would mean for future relations with Washington and the rest of the international community.
Netanyahu’s moves go nowhere near the U.S. demand to cancel a major new housing project at the heart of the row, but apparently he has offered enough to prompt U.S. Secretary of State Hillary Rodham Clinton to call them “useful and productive” and dispatch an envoy back to the region this week.

NOTE: This is why the Tundra Tabloids, if you have noticed, has taken to adding the prefix of “al” to all the wire services acromyms,  exm: al-AFP. They write from the Arab narrative so we might as well give them the full honors of being identified with them.
It continues:

U.N. chief Ban Ki-moon, who was touring the Gaza Strip on Sunday, told reporters that Netanyahu would be meeting with President Barack Obama while in the U.S. The prime minister’s office had no immediate confirmation.
He described Israel’s recent opening of Gaza’s borders to allow in window frames and other supplies to complete a 151-apartment U.N. housing project in southern Gaza as “a drop in a bucket of water.

The blockade causes “unacceptable suffering” and “undercuts moderates and encourages extremists,” he said, after visiting the project in the Khan Younis refugee camp. “My message to the people of Gaza is this: the United Nations will stand with you, through this ordeal.” ”

[TT: In the fantasy world where Ban Ki-Moon lives, being a homicidal genocidal organization is of little consequence, and that the people that placed them into power bear no responsibility whatsoever. The Tundra Tabloids begs to differ with the absurd little S.Korean.
Also noteworthy, is that one of the main reasons he so worried about the plight of the Hamas run enclave, is due to the pressure coming from both the OIC and Arab League. These organizations could care less for the average Israeli citizen’s well being, or whether Hamas murders Fata members and vice versa.
It only gets their goat when Jews defend themselves and manages to kill an Arab, whether it be an actual terrorist, or an unwanted civilian casualty. When Hamas was busy throwing Fatah members of from roofs, did the EU, OIC and Arab League demand from the UN Secuirty Council to send a fact finding mission to investigate the Hamas takeover of the Strip? Nope. Nor did the UN General Assembly issue a resolution of condemnation either.]

Most of the 15,000 homes destroyed or damaged during Israel’s war in Gaza that ended in January last year have also not been repaired because of the blockade. Israel launched the war after years of militant rocket fire from Gaza on its southern communities.

[TT: Oh-shut-up-please. Any concrete and rebarb used in consrtuction would be immediately used in the building of the Hamas terrorist infrastructure. Besides, why waste all that money in rebuilding when it’s only going to get demolished later on, because Hamas is not going to change its spots anytime soon.]
Is life hard, yes, is Hamas totally responsible for the plight of the people it claims to represent, yes. So instead of directing its demands to Israel, the silly little S.Korean, Ban Ki-Moon should be directing his ire towards the Hamas, demanding that they change their tune, and stop their disasterous terrorist war against Israel. KGS