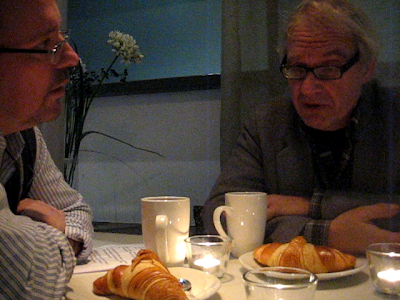 The Tundra Tabloids and Lars Vilks
Lars Vilks: [“I have prepared in different ways and I have an axe here in case someone should manage to get in through the window,”]
The recent capture of the “Jihadi Seven” in Ireland, as well as the American jihadist wannabe, Jihad Jane, from Philidelphia PA., adds a new twist to the story of the Swedish artist who dared to draw the prophet of Islam as a roundabout dog.
The Tundra Tabloids believes that Mr.Vilks is handling the situation correctly as one can be expected to under the circumstances, by heeding the advice of the police and not allowing himself to be intimidated by these low-life scum buckets. The TT wishes to extend to Lars Vilks all the best, and advises more of his colleagues to stand by him in solidarity, to draw their own pictures of Mohamed, the false prophet of allah’s Islam.
The more they exert themselves to intimidate us with the threats of violence, the more we should push back with all that we have to highlight their idiocy. Using the arts, comedy, the pen and the keyboard, we should make mockery after mockery of Islam and their unholy and very degenerate prophet. Making fun of them every time someone from their hateful creed makes a statement about the West, or issue threats againt one of our own.
Lars Vilks shows the way, do not be intimidated, but be emboldened instead. KGS
Vilks ‘not shaking with fear’ over murder plot

Swedish cartoonist Lars Vilks said he was undaunted by revelations of a plot on his life after seven people were arrested in Ireland on Tuesday.
“I’m not shaking with fear, exactly,” Lars Vilks told Swedish news agency TT.
“I have prepared in different ways and I have an axe here in case someone should manage to get in through the window,” added Vilks, who since the publication of his drawing of the Muslim prophet Muhammad as a dog three years ago has had a $100,000 bounty on his head from an Al-Qaeda-linked group.
His comments followed news that four men and three women, all Muslims originally from Morocco and Yemen, had been arrested in southern Ireland over an alleged plot to assassinate him.
Vilks said he had received threatening phone calls from Somalia at the beginning of the year and that the Swedish security police, Säpo, had since warned him there was a heightened threat level against him.
“But I didn’t think it was that serious,” he told TT.
Säpo spokesman Mattias Lindholm told AFP that the agency was informed about the international operation leading up to Tuesday’s arrests.
“We have cooperated … Right now we are in continuous touch with the authorities involved, including our Irish counterparts,” he said.
Lindholm refused to comment on the threats against Vilks or on Säpo’s actions to protect him.
Swedish newspaper Nerikes Allehanda published a cartoon on August 18, 2007 depicting the Prophet Mohammed as a dog to illustrate an editorial on self-censorship and freedom of expression and religion.
The cartoon prompted protests by Muslims in the town of Örebro, west of Stockholm, where the newspaper is based. Egypt, Iran and Pakistan made formal complaints and death threats were issued against Vilks.
An Al-Qaeda front organisation offered $150,000 to anyone who slit Vilks’ throat or $100,000 for his murder by other means, while they also offered $50,000 to kill newspaper editor-in-chief Ulf Johansson.

UPDATE: Kumitonttu reports that the Swedish press, Expressen, Dagens Nyheter ja Sydsvenskan have reprinted Lars Vilks’ picture of Mohamed, but Reinhard says that their not viewable online, and that the SvD declines to print it since it’s “deeply offensive to many people”.

The Danish Jyllands-Posten stands tough as always, and publishes it regardless.