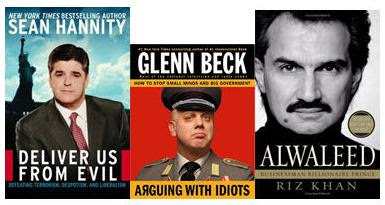 CREDIT WHERE CREDIT IS DUE

The Tundra Tabloids first posed the question yesterday about Glenn Beck’s sudden reversal about Geert Wilders, asking “why did he do it“. TT contributor, TINSC offered a short but sweet delivery on why Glenn Beck did it, and after reading Diana West’s contribution to the subject the TT felt that it was the right thing to do to give credit where credit is due.

TINSC: “Glenn Beck is a card-carrying member of the Saudi Petrochemical Lobby. I’ve been pointing this out for quite some time. If you read his latest book, he promotes a petroleum policy that is clearly in the Saudi’s interests. Sometimes people gots to find out the hard way.”
Bingo. Both TINSC and Diana West offer valid points. Saudi money is flowing freely to both sides of the aisle, towards the Leftist media as well as to the Right wing media, namely Fox News. Getting the media to go light on the jihad, Islam etc. etc., is the one of the reasons why Alwaleed is sinking big bucks into News Corp. Another thought worth pondering is, whether or not FOX NEWS pundits are just plain ignorant about jihad, and Islam in general. KGS
NOTE: A parting thought, what sense is there in allowing a this Saudi billionare anywhere near the US media, it’s as absurd as the US allowing the Chinese to buy up US debt. Does anyone seriously believe that such indepth contact and the accepting of funds from these entirely authortarian regimes, does not come with a price tag?
Here’s what Diana has to say, take it, chew on it, and decide for yourself whether it warrants futher consideration. Diana West:

A couple of week’s ago, I blogged about Saudi Prince Alwaleed bin Talal’s charm-blitz through NY, juxtaposing Fox News’ Neil Cavuto’s sweetheart interview with “the prince” and Charlie Rose’s far more revealing conversation — essentially, it’s (everything’s) all Israel’s fault, and “my” 1.5 billion Muslims are all like the underpants’ bomber’s father.
I kept thinking about Alwaleed — his stake in News Corp., his stakes in Georgetown and Harvard — and realized that as a leading scion of the so-called House of Saud (q: how many countries are named for their rulers?), a totalitarian theocracy whose foundational documents — the Koran, the Sunnah, the Hadiths — place it in direct ideological conflict with the US Constitution, he operates not just as a billionaire businessman, but also, inevitably, by virtue of who he is, as an agent of Saudi influence.
News Corp. wants to do business with him? Fine. But shouldn’t News Corp.’s Fox News thus be required to register with the State Department as a foreign agent of Saudi Arabia? That’s the question posed by this week’s syndicated column:
Should Fox News register with the State Department as a foreign agent — an agent of Saudi Arabia?
First off, is that a farfetched question? Not when a leading member of the ruling family of the sharia-totalitarian “kingdom” of Saudi Arabia, Prince Alwaleed bin Talal, has made himself the second-largest shareholder of Rupert Murdoch’s News Corp., Fox News’ parent company.
Just as Steven Emerson believes that American universities using Saudi mega-millions (many from Alwaleed) to set up Islamic studies departments should register as Saudi agents, I believe an American news channel part-owned and part-influenced by the Saudi prince should, too.
Alwaleed’s long march through U.S. institutions is a mainly post-9/11 progression greased by his purchase of about a 5.5 percent stake in News Corp. in 2005, and his purchases, I mean, gifts, of $20 million apiece to Georgetown and Harvard Universities, also in 2005.
There have been other eye-catching displays of Alwaleed’s largesse — $500,000 in 2002 to the Council on American Islamic Relations (CAIR), a Hamas- and Muslim-Brotherhood-linked entity, and a whopping $27 million, also in 2002, to the families of Palestinian “martyrs,” aka suicide bombers. These, along with Alwaleed’s self-described “very close relationship” with Murdoch son and apparent heir-apparent James, a left-wing global-warmist with virulently anti-Israel views, should only deepen Americans’ concerns about Fox’s ties to “the prince.” Recently, Murdoch and Alwaleed have discussed expanding their business relationship through the Murdoch purchase of a substantial stake in Rotana, Alwaleed’s huge Arab media company.
Before entering his Murdoch association, Alwaleed gave a remarkably candid interview in 2002 about what Arab News described as his belief that “Arabs should focus more on penetrating U.S. public opinion as a means to influencing decision-making” rather than boycotting U.S. products, an idea of the moment.
The Arab News reported: “Arab countries can influence U.S. decision-making ‘if they unite through economic interests, not political,’ (Alwaleed) stressed. ‘We have to be logical and understand that the U.S. administration is subject to U.S. public opinion. We (Arabs) are not so active in this sphere (public opinion). And to bring the decision-maker on your side, you not only have to be active inside the U.S. Congress or the administration but also inside U.S. society.'”
And active inside U.S. society living rooms — even better. Alwaleed would seem to have hit on a Fox strategy some time after Rudy Giuliani refused to accept, on behalf of a 9/11-shattered New York City, his $10 million check-cum-lecture that essentially justified the al-Qaida attacks as having been a response to U.S. foreign policy.
This was “such an egregious, outrageous, unfair offense that I would have nothing to do with his money either,” Sean Hannity said at the time on Fox News’ “Hannity & Colmes,” his remarks (and those of other Fox personalities) recently re-examined by the left-wing group Media Matters. “This is a bad guy,” Hannity said. “Rudy was right to decline the money.” Bill Sammon called Alwaleed’s check “blood money,” adding, “we’re better off without it.”