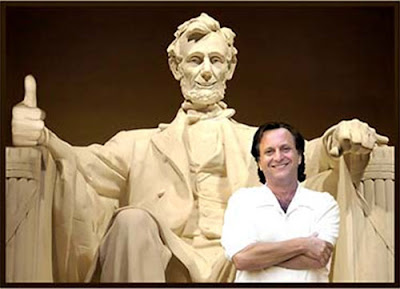 Evan Sayet: [“Ironically, those who deny America’s unprecedented cultural greatness are forced to believe in American exceptionalism – left with no other choice than to believe that America is exceptionally evil.”]
Here’s an excellent article by Evan Sayet that hits home on many levels. There’s more to the political divide in America than most would dare admit, that the US is caught in the middle of a struggle for the very soul of what defines America. To put it bluntly, the US constitution is in danger of being thoroughly subverted if these cultural relativist elitists have their way.
There is currently in power a political clique of intellectual elitists that Obama represents, who truly think that they alone have the answers to America’s problems, not the people themselves. These elitists do not trust in the US constitution that they’ve sworn to uphold and defend, on the contrary, they view that document with contempt with every piece of legislation that they try to ram through against the expressed wishes and desires of the American people.
For the very first time in US history, the people have elected a president, unbeknownst to them, that holds the belief that Americans shouldn’t have the right to bear arms. Such thinking goes against everything that the US framers of the constitution had in mind. But that’s only for starters. Evan Sayet offers some valid reasons as to why. KGS

[…] In today’s culture war, what determines whether one supports the liberal or the conservative position on any given issue is what they believe about exceptionalism in general and American exceptionalism (and that of Western Civilization) in particular.
On one side of the battlefield are those who reject the notion of cultural exceptionalism. They are the “multiculturalists” and the “Citizens of the world” who are convinced that those who recognize America’s unique greatness are not only bigots (“xenophobes” and “nativists”) but dangerous bigots whose blind adoration of America’s unique culture can only lead to war and with it the poverty, crime and injustice that war inevitably brings.
Ironically, those who deny America’s unprecedented cultural greatness are forced to believe in American exceptionalism – left with no other choice than to believe that America is exceptionally evil. After all, if America’s unique constitution, unprecedented Judeo-Christian values and unequalled Protestant work ethic are no better and no worse than any other culture, then one must explain America’s undeniable and unequalled success. To their way of “thinking,” America’s unparalleled prosperity, ingenuity, creativity, productivity and strength are not just unjustified and unjust, but because of the magnitude and duration of that success, America is the greatest injustice in the history of the world.
To those who deny America’s exceptional greatness the only other alternative is to believe in America’s exceptional evil.
The purpose of the policy of those with this vision, then, is to pursue justice by undermining America at every turn. Her sovereignty should be turned over to one-world (supposedly non-bigoted) bodies, her wealth redistributed to nations based on nothing other than their violence and economic failures. After all, to the multiculturalists the failures of other nations serve as proof positive of their victimization.
Read it all here.