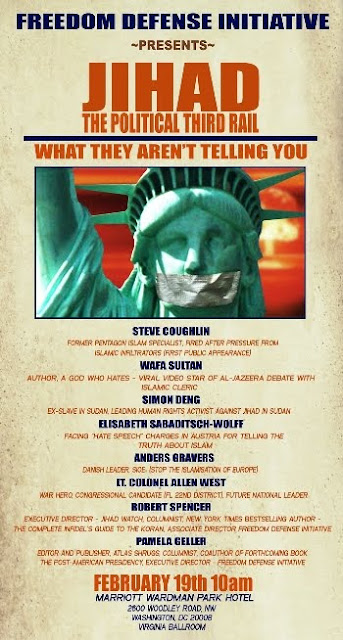 The Freedom Defense Initiative’s inaugural conference to be held in the nation’s capital alongside the CPAC event tomorrow, promises to be an interesting affair. Atlas Shrugs’, Pamela Geller and Jihad Watch’s, Robert Spencer, are spearheading the event designed to help awaken the American public to the dangers that the Muslims Brotherhood (promoters of the stealth jihad) poses to the US. Here’s what Pamela has to say about tomorrow’s conference:

“The conference is designed to educate Americans about the Muslim Brotherhood’s infiltration at the highest levels of the U.S. government, as well as its war on free speech: its attempt to silence and discredit those who speak up against the jihad and Sharia encroachment in the West. Emphasis will be on the international character of the jihad against the West and on how the Islamic war on free speech (and the media’s self-imposed blackout on this issue, as in the Fort Hood massacre) is part and parcel of the same jihad against the West that terrorists are pursuing by violent means.” “Here is more proof of why this conference is so very necessary. All you have to do is utter jihad and the smear merchants and their handmaidens come out shooting.”

Fox’s Judson Berger: “A panel discussion on the threat posed by “Islamic supremacism,” Shariah and political correctness has been scheduled for this week’s Conservative Political Action Conference, stirring complaints from some American Muslims that the exercise amounts to Muslim-bashing.
The two-hour session, titled “Jihad: The Political Third Rail,” is set for Friday morning, right in the middle of the three-day annual summit of conservative icons and activists in Washington, D.C.
[…]
Overall, CPAC is attuned more to political strategy and domestic issues, but organizers of the “Jihad” session have been trying to stir the pot with what they call a blunt and objective discussion of Muslims’ attempts to harm the West while silencing criticism. Mission accomplished. The pot has been stirred.
[…]
[Let’s not forget to bring in “Dishonet Abe” from CAIR, the inidicted co-conspirator in the Holy Land Foundation trial in Texas in which five of Abe’s co-religionists were convicted of supplying funds to the terrorist organization Hamas]
“It’s unfortunate that a conservative conference would be in any way associated with Muslim bashers and Islamophobes,” said Ibrahim Hooper, spokesman for the Council on American-Islamic Relations. “It’s a free country. They’re free to be anti-Muslim bigots if they like, but it’s really up to the organizers of CPAC to determine if they’re going to allow their conference to be associated with the hate-filled views of those who will be speaking.”

Spencer takes note: In any case, [FOX reporter] Berger’s piece is ironic: it is an object lesson in what happens to those who dare to speak the truth about the global jihad and Islamic supremacism. And so it is a vivid illustration of why our conference is so urgently needed. …

Notice that Berger portrays the Islamic war on free speech as something we are merely claiming is taking place. He probably made no effort to find out whether such a thing was really going on at all. He probably has no idea that the Organization of the Islamic Conference (OIC), to which Obama just sent a special envoy, has for years now spearheaded an effort at the UN to compel member states to criminalize what it calls “defamation of religions,” but by which it clearly means any honest discussion of the texts and teachings of Islam that jihadists invoke to justify violence and supremacism.
In 2008, Ekmeleddin Ihsanoglu, the Secretary General of the OIC, which is the largest voting bloc at the United Nations today, warned the West about “red lines that should not be crossed” regarding free speech about Islam and terrorism. But Judson Berger apparently knows or cares nothing about any of this. He thinks we’re just stirring the pot.”
As the Tundra Tabloids alread said, the FDI conference promises to be an interesting event. That the good friend and colleague of the TT is one of its main scheduled speakers, Elisabeth Sabaditsch-Wolff, is just icing on the cake. KGS