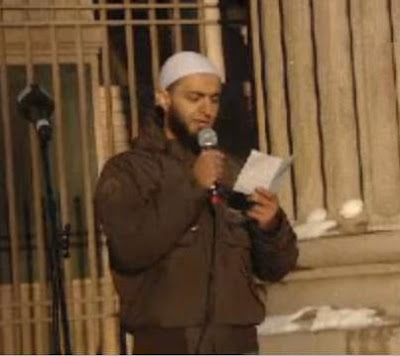 The Norwegian version of London’s Anjem Choudary
Actually, it’s always a good thing to have honest Muslims speaking out loud on their true beliefs, and what they really think about western democracy. That alone should give every citizen of Europe pause, about the mass immigration of people from parts of the developing world (read=Muslim lands) where such thinking is considered normal.
Demonstrators: Stone homosexuals

Also of interest is a post by the TT’s fellow Scandinavian blog, NIJ, who writes that one of the people who accompanied Mohyeldeen Mohammad to Medina to study Islam, happens to sit on the city council in Stavanger, along with his father:

“Mohyeldeen Mohammad has received much attention for his statements regarding 9/11 and homosexuals. He attends the Medina-University of Saudi-Arabia. There are several Norwegians there, among them Arshad Ali Mubarak who sits on the city council for Labor in Stavanger.
Also his father, Ali Mubarak, is on the city council for Labor. Father and son have appeared in the newspapers and told of their political commitment. They made themselves noticed nation-wide when they proposed that Stavanger center be laid dry of alcohol.
Apparently well-integrated city councilmen for Labor may become sufficiently religious to attend religious studies in Saudi-Arabia. The riddle lies nearer than we like to believe, and it is large.”

So lets get this straight, the very Muslims being championed as examples of truly intergrating themselves into Norwegian society, are the very same ones that hold traditional Saudi views on Islam. The Saudis, by the way for those of you who still do not know, are the safeguarders of Islam, the ones who are supposed to know what Islam is all about, from cover to cover and from book to book, the standard bearers of Mohamed’s desert cult.
It’s highly amusing for the Tundra Tabloids to hear people (either ignorant or downright disingenuous) describe the jihadis as having “warped” the teachings of Islam, though they get their teaching straight from the people who have either been schooled in Saudi Arabia, or actively teach and preach there. To say that the Saudis don’t know or understand their own ideology, is like saying the Vatican doesn’t understand the Gospel of Christ or the Code of Canon Law. KGS

UPDATE: Islam in Europe reports that after M.Mohammad’s interview in the commie rag, Klassekampen, he went on to threaten two journalists waiting outside his home to interview him.

“On Tuesday, Dagbladet journalists wanted to speak to Mohammad. Since he wasn’t home they waited outside. When he showed up, he started threatening them, telling them that if they don’t go, they’ll be shot. When they repeated that they wanted to speak to him, he said “there are people on the way here to shoot you now.”
On Wednesday afternoon he was detained by the Larvik police. Mohammad was detained when he came to the police station to complain that he himself was subjected to threats, both by phone and SMS, according to Magnar Pedersen of the Vestfold police. According to the police Mohammad was threatened that he would be killed and his house would be stoned.
He was interrogated and then released. Mohammed admits he made the threats, but claims he didn’t realize they were journalists and was reacting to the threats he was getting.”