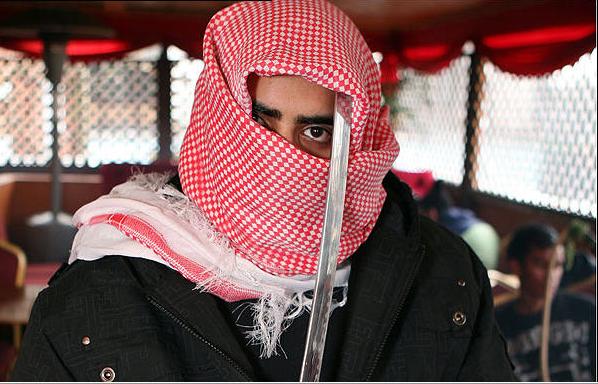 Other criminals are scared we’re al-Qaida
No doubt these thuge are involved in some kind of terrorist funding, it’s only a matter of time when the full depth of their involvement is made known. What’s even more worrisome are the prisons being used as recruitment centers for Islam and the jihad. KGS

NOTE: Remember folks, stealing and victimizing the infidel is not a problem for religious Muslims, they’re just following the way of their prophet.

IN traditional Islamic headgear, Asian ex-gang member Amir poses with his sword and issues the stark warning: “Britain’s underworld belongs to the Muslims.”
The 21-year-old, whose organisation turned over thousands of pounds a day from drug-dealing and credit card scams, claims a post-9/11 fear of terrorism has allowed Muslims to develop a stranglehold on our criminal community.
Through Islam, he says, they have numbers which cannot be matched, and rival gangs are being forced out by ruthless Islamic criminals who only deal with each other.
They recruit black and white members in Britain’s jails, tempting them to convert to Islam in exchange for a cushier life inside.
Once released, the converted cons have access to an entirely new network of Muslim criminal contacts – and are trusted because they pray to Allah.
Amir claims that Britain’s underworld will soon be completely dominated by Islamic gangs – and he says the West’s paranoia over terrorism is to blame. “People don’t f*** with us because they think we’re all in al-Qaeda,” he explains.
“Our status in the criminal hierarchy changed literally the day the Twin Towers went down.
“From then, Asians have been associated with terrorism. People, including other criminals, think if you’re Asian you’ll blow up a Tube train or bomb an aeroplane.
“In the past 20 years we’ve capitalised on that. If we’re going to be thought of as extremists, why not use that fear?
“The reality is that Asian gangs don’t give much of toss about religion, but with Islam comes fear, and with fear comes power.
“Religion is important to us only as a way of defining who we can trust and who we can work with.”
Amir adds: “Young Muslim gangs aren’t worried about what Allah makes of their criminal ways – they don’t believe in it to that extent.
“Through religion we speak the same language, live in the same areas, go to the same schools and can even use mosques as a safe place away from the police or other gangs. If you f*** with a Muslim gang you’d better be able to run fast or hide well, because they will come back at you in numbers.”
You do not have to look far to find an example of this.
In 2007 white schoolboy Henry Webster was beaten with a hammer by a huge gang of Asian pupils calling themselves the Asian Invasion. The 15-year-old pupil at the Ridgeway School in Wroughton, Wilts, was left brain-damaged.
Since then, it has been said in court that the school was the scene of numerous violent incidents involving Asian youths who were “radicalised and hostile” since the 2005 London bombings.
And in March last year, Judge Giles Forrester warned that London’s streets are becoming “increasingly dangerous places” as he jailed an Asian gang for stabbing to death rival black gang member Jevon Henry, 18, in north London.