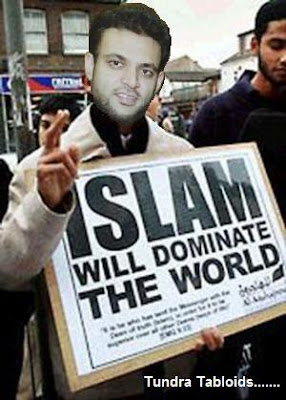 Rashad Hussain: So what?
I also know the Koran by heart and know what it means
How come this doesn’t come as a total surprise? If you’re an American that doesn’t hate your country, believe in non-intrusive government and that America sticks by its democratic allies, what about Obama is there to like, other than that his has nice set of white teeth? KGS

(CNSNews.com) – President Obama’s newly appointed envoy to the Organization of the Islamic Conference was quoted in 2004 as saying an American who aided a Palestinian terrorist group was the victim of “politically motivated persecutions” who was being used “to squash dissent.”
Rashad Hussain was quoted as telling a Muslim students’ event in Chicago that if U.S. Muslims did not speak out against the injustices taking place in America, then everyone’s rights would be in jeopardy.
The Washington Report on Middle East Affairs (WRMEA) cited Hussain as making the remarks in connection with Sami al-Arian, a university professor and activist sentenced in 2006 to more than four years in prison (including time already spent in custody) after he had pleaded guilty to conspiring to aid the Palestinian Islamic Jihad (PIJ).
The U.S. government designated the PIJ as a foreign terrorist organization in 1997, and in 2003, then Attorney-General John Ashcroft described it as “one of the most violent terrorist organizations in the world.
Palestinian Islamic Jihad has killed more than 100 Israelis in suicide bombings and other attacks. Its victims include American citizens Alisa Flatow, a 20-year-old New Jersey college student killed in a 1995 suicide bombing in Gaza, and 16-year-old Shoshana Ben-Ishai, shot dead in a bus in Jerusalem in 2001.