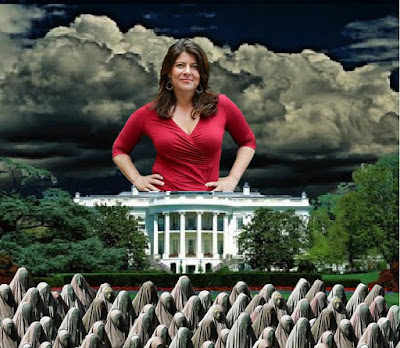 All of this would sound crazy, if not for the fact that we are living in an age where Leftist morons parade themselves as real human rights activists. Future generations will condemn us. KGS

Naomi Wolf, Will You Denounce the Honor Murder of Medine Memi?

In Turkey just recently, a father and grandfather repeatedly beat Medine Memi, a sixteen-year-old girl, for the crime of talking (allegedly) to boys. The police weren’t interested. The beatings were eventually deemed insufficient punishment for Medine for the temerity of having her own human agency, so the father and grandfather killed her by burying her while she was “alive and fully conscious.”
My dear friend and courageous freedom fighter Phyllis Chesler has written about this barbaric murder and described it as a “savage, heartless, primitive act” that “is the ultimate, logical consequence of burying women alive—shrouding them–while they still roam the earth. One becomes claustrophobic under the burqa, until one gets used to being seen as a ghost, invisible, non-human, dead.”
I can’t help from wondering: when are all the brave Western leftist feminists going to protest with vehement anger about the fate of Medine Memi and about the Islamic ideology that spawned her barbaric murder?
I wonder if we’ll be hearing from Naomi Wolf? She really cares about women’s rights, doesn’t she? Well, she thinks the burqa is “sexy,” we know that.
So the question must be asked: Does Naomi think throwing Medine Memi into a hole in the ground and burying her alive is sexy too? If she doesn’t think it’s sexy, where are her expressions of moral outrage at this vicious crime committed against a young Muslim girl, a crime that represents the horrible oppression of women under Islamic gender apartheid?
Could it just be that we won’t be hearing from Naomi Wolf — or from any of her like-minded “feminists” — because, when it comes down to it, she really doesn’t care about Medine Memi and other victims of Islamic gender apartheid?
Read it all here.