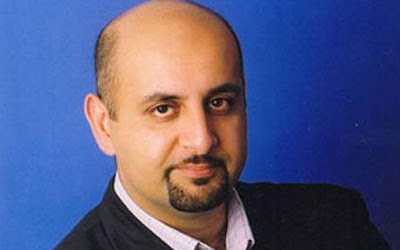 Aaqil Ahmed: Take your complaints
to the Archbishop of Dhimmitude
You simply can’t make this crap up if you tried. On the one hand you have the Archbishop of Cantebury defending the decision to allow Islamic sharia to operate on Christian British turf, then on the other hand is the BBC who elects a Muslim to head its religion department that is getting messages from the same Archbishop complaining about anti-Christian bias, but believes Islam can co-exist equally with Christianity.
Remember folks, the Counterjihad recognizes today as “Dhimmitude Day” in honor the drone, the Archbishop of Cantebury, Rowan Williams, for his defense of Muslims to operate under sharia law. KGS
Church of England is ‘living in the past’, says BBC’s head of religion
Aaqil Ahmed, a controversial executive whose appointment last year prompted more than 100 complaints, said: “I think all the faiths should be treated in the same way. I don’t believe in treating any faith differently.”
He dismissed claims that the BBC was marginalising religion as overly simplistic and argued that Christianity, in particular, was already covered well on television.
His comments come on the eve of a debate at the General Synod, the Church’s parliament, over the BBC’s treatment of Christianity.
There has been growing concern at top levels of the Church over the corporation’s approach to religion, with warnings that it must not ignore its Christian audience.
Dr Rowan Williams, the Archbishop of Canterbury, met last year with Mark Thompson, the BBC’s director-general, to discuss religious broadcasting.
Bishops, clergy and lay members of the General Synod will vote this week on a motion calling on the state broadcaster to explain why its television coverage of Christianity has declined so steeply in recent years.
Output has fallen from 177 hours of religious programming on BBC television in 1987/88 to 155 hours in 2007/08 – a period during which the overall volume of programming has doubled.
However, in an interview with The Sunday Telegraph, Mr Ahmed, an award-winning programme-maker, said that the Church’s criticisms were too simplistic.
“I don’t believe that we should be basing the debate on 20-year-old figures, the conversation is far more complicated than that,” he said.
“It’s very easy to live in the past, but we live in the present. In a few years’ time the way we’re going to view television will change radically, so the conversation will become even more redundant.
“We’ll listen to what they say, but we’re clear that we know what we’re doing and we’ll stick to that.”