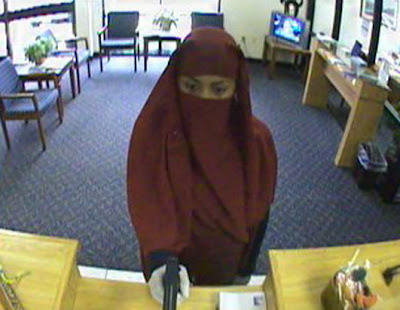 Stick em you up
The Tundra Tabloids has been a strong supporter of banning the burka and the niqab in all public places for years, due to the security risk it poses, morally, for its denegration of both women and men, and physically, for the health risk it poses to those who wear it. Any which way you look at it, both the burka and niqab are bad for society.
And yet, just the other day, Finland’s Minister of Immigration, Astrid Thors stated in an interview (in Finnish)that she thinks there’s no just reason for the banning of it here in Finland. So as France grapples with the issue head on, Finland takes a back seat to the issue, how predictable, at least with Astrid Thors behind the wheel. KGS

Armed robbers disguised in burkhas escaped with thousands in cash after carrying out a post office raid in Paris.
The crime – which took place yesterday in the suburb of Athis Mons – comes as the French government faces growing calls for the controversial garments to be banned.
President Nicolas Sarkozy himself has described them as a ‘security risk’, saying they provide the perfect cover for criminals or terrorists.
Now those fighting for the ban claim the robbery – which is the first of its kind in France – shows how useful the burkha is as a disguise.
It took place at around 10.30am, when two robbers carrying pistols entered the main post office bank building in Athis Mons, which has a large immigrant Muslim community, mainly from North Africa.
Once inside they ordered a bank clerk to take out the equivalent of £4,000 in cash by pointing a pistol at him. After ten minutes they fled to a nearby car park and escaped.
Police fear that they will not be able to identify the robbers on CCTV cameras.
‘It was a perfect disguise,’ said one detective. ‘Their faces and bodies were completely covered.’
The robbery led to Le Parisien, the main daily paper in the French capital, to ask: ‘Will this first robbery using a burkha re-launch the debate about the Islamic veil being worn in public places?’
A government committee has already recommended that burkhas should not be allowed in civil buildings and on public transport, and a full ban could follow.
In August in the UK a robber dressed from head to toe in a traditional Muslim woman’s burkha raided a travel agent, and also made off with thousands in cash.
There were similar raids in other parts of the country, with one burkha-clad robber getting away with £150,000 from a jewellers in Banbury, Oxfordshire.

[Vlad Tepes: “Of course we do not know if the robbers are Muslim or not. We do know, tolerance of people walking around completely stripped of identity has its costs. This is one of them”. ]