Henrik Raeder Clausen sends the Tundra Tabloids the following picture that’s sure to conjur up a lot of mixed feelings. 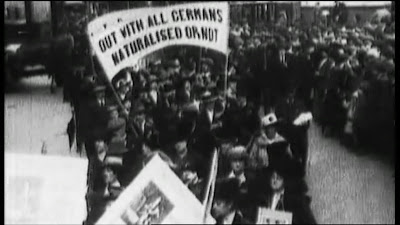 HRC: “I’d like you to ponder this picture from WWI in England, from a demonstration after one of Germany’s major war mistakes, a costal bombardment of English villages. This is a peaceful expression of free citizens in a free country, no one arrested for ‘hate speech’ or ‘racism’.
The demonstration constituted a credible threat that Germans could be summarily deported if they betrayed the country (Britain) they had chosen to live in, even those generally considered well integrated in their new homeland. Apart from the Irish uprising, practically no such betrayal took place, and no deportation of Germans, naturalized or not, did take place.”
In a more sensible age, people were able to freely express their opinions about any given subject, no matter how much the idea was disagreed with, (in this case the demonstration against the Germans, with whom the United Kingdom was at war.) and not run the risk of being called a ‘xenophobe‘.
Now do as Clausen asks, and ponder on this for a moment. Resist that knee-jerk reaction of the brain, hard wired with decades old political correctness that immediately demands all thoughts meditating on “who to like and to dislike”, to cease and desist.

Now mind you, this isn’t about the rejection of a people or a group of people based on irrational sentiment like for an example, antisemitism, the hating a of people, or a race of people due to the insane notion that one happens to be superior to another based solely upon one’s own genes.

The above picture first and foremost has everything to do with peoples’ sense of security, and their right to demonstrate their feelings about the heightened sense of loss of that security. Interestingly enough, the thought most likely never even occured to them that they would be harrassed in the process for being “racist”, unlike today, when the mere mention of profiling, brings every Leftist activist out from the cracks in society screaming bloody murder.

Now, the Tundra Tabloids isn’t advocating the deportation of every Muslim residing in the West, regardless of whether they are naturalized citizens or not, due to any possible threat that they may pose. But on the other hand, the only way to safeguard a society from an external threat, is to ensure that there isn’t an internal threat waiting in the wings, and these fears need to be freely addressed in a proper and forthright way.