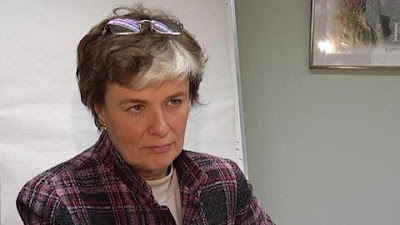 Just like other political elitists around Europe, they’ll continue to dismiss the will of the people that demands a tougher stance on immigration issues even if it comes at the expence of their own ethnic group. They’re that stubborn and arrogant.

The dual drones of Astrid Thors and Stefan Wallin, are both members of the Swedish People’s Party, whose leadership ironically, is in favor of the same mass immigration policies that continues to diminish their own party’s influence in Finland.

Sign of the SPP’s slipping from its current enjoyed and protected status, was the ruling a couple of years ago that immigrants can seek work in the public/government sector without a command knowledge of Swedish. Finland is an officially recognized bi-lingual state, with Swedish being taught in the schools on a mandatory basis for over 3 decades.
That’s all soon to change if mass immigration is to continue, it’s only a matter of time, and the ones who are to blame are the very ones who say they are keen to protect the Swedish language in Finland. Now how ironic is that?  KGS

The populist True Finns party is demanding that Minister of Migration and European Affairs Astrid Thors resign from her post. The party alleges she has handled her job poorly by promoting a liberal migration policy that has attracted more asylum seekers.
The True Finns point out that the Finnish Immigration Service is struggling to process a backlog of 6,000 family reunification applications. The party is particularly concerned over family reunification because it fears the policy will bring in more refugees from Somalia and Iraq.
The party says Finland’s liberal migration policy is to blame for the recent large influx of family reunification applications. They’re now calling on the government to scale back migration and refugee policies to prevent Finland from appearing more lucrative than other countries.
Culture Minister Stefan Wallin, Thors’ fellow Swedish People’s Party politician, reacted to the comments by saying that Thors enjoys the full support of government.
“The True Finns are starting to sound like a broken record,” he added.