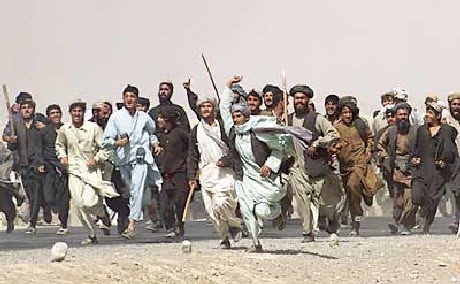 LAST ONE INTO THEIR SUICIDE VEST
IS A STINKY ROTTEN EGG!
The actual “Tet offensive” took place in S.Vietnam in 1968, by the combined forces of the North Viet Cong and the N.Vietnamese Army. Though the surprise attack was a abject failure, never to be tried by the Communists again, it proved to be the beginning of the end politically, as the Leftist US news media spear headed by CBS’s, Walter Cronkite, began depicting the conflict as a lost cause, subsequently the US public lost interest and demanded a pull out.
While this recent multi pronged attack in Kabul by the Taliban, lacks in both size and strategic depth, it could serve as a wake up call to NATO forces that they can no longer afford allowing the Taliban to be seen as a winning force. The “Tet Offensive” might have been in the minds of the Taliban for launching the attack, but it most certainly should be in the minds of NATO’s military leadership. KGS

About two dozen gunmen, some wearing suicide vests, have attacked locations across Kabul in a coordinated commando-style operation against several targets, including banks and Afghan government ministries.
Gunfire from street battles and loud explosions could be heard across the capital in the worst attack on the city in almost a year. The Taliban claimed responsibility for the attack, which came as some cabinet members of President Hamid Karzai were being sworn in.
“At least ten people who are suicide bombers are in several buildings, including in banks and shopping centres,” security officer Amir Mohammad said at the scene where Afghan forces had cordoned off parts of central Kabul.
He had no information about casualties.
Another security source said as many as 30 attackers could be involved in clashes and three people had been killed.
“Gunmen are besieged in the store,” he said, referring to a large store opposite the justice ministry and close to the presidential palace.
“They are firing on security forces and we believe suicide bombers are among them.”
Zabihullah Mujahid, spokesman for the Taliban, said 20 of the insurgent group’s fighters, including suicide bombers, had occupied several government buildings and were clashing with Afghan security forces.