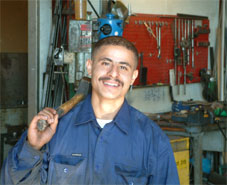 Fakestinian shootist, Wissam Freijeh:
I felt threatened by health care venders
The Danish court wasn’t fooled by the Fakestinian’s lame nonsense about feeling “threatened” by Israeli salesmen selling health care products in Danish shopping mall. He’s going to have to sit in a cell for the next ten years for five counts of attempted murder. KGS

A Danish-Palestinian man has been convicted of attempted murder on five counts in the Odense District Court after he shot at Israelis in a shopping centre.
The court did not accept Wissam Freijeh’s defence that he felt threatened by the three Israeli men who were operating a skincare booth in Odense’s Rosengård centre when he shot at them on New Year’s Eve 2008.
Two of the men were hit by shots and despite the defence’s assertion that the defendant had fired at the floor, the judge returned a verdict that the three Israelis and two female customers present could have been killed by the gunman.
Freijeh was sentenced to 10 years imprisonment and ordered to pay 5241 kroner in compensation to one of the female customers present when the shooting started.
A group of 15 Israelis involved in the business venture, including those injured in the attack have since returned to Israel on the advice of the Danish Security and Intelligence Service.