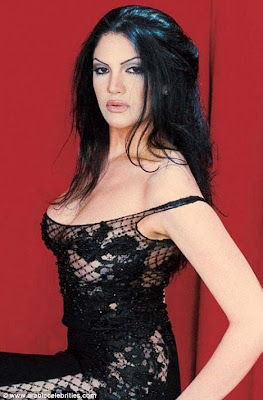 Thanks a lot ‘Hannibal’
In the steadfast tradition of “The sons of Muslim Dictators”. Just think of Saddam Hussein and you’ll get the picture. Just think what ‘Hannibal’ is allowed to get away with in Libya. KGS

The playboy son of Colonel Gaddafi was at the centre of a police inquiry last night over claims he attacked his wife in a top London hotel on Christmas Day.

Moutassim Gaddafi – known as Hannibal – was staying with his wife, the model Aline Skaf, 29, and their children in a luxury suite at Claridge’s when the fight broke out.

Police were called to the family’s £4,000-a-night suite at 1.30am after hotel staff heard a woman’s screams for help.

But when officers arrived they found the Libyan despot’s 33-year-old son locked in the room with his wife – with his bodyguards blocking their way.

Three of the security staff were arrested at the scene for obstructing police officers.

Mr Gaddafi, however, was able to slip away after calling the Libyan ambassador, who informed officers that he had diplomatic immunity.