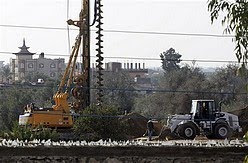 Cairo seeks to stop smuggling under Gaza border
And of course the genocidal Hamas seethes with rage over it, because it will seriously crimp their weapons smuggling business under the border. How many of you believe that the current indifference by the international community towards the Egyptian wall building at the Gaza border would exist, if Cairo was substituted with Jerusalem? KGS

Egypt’s decision to build an underground metal wall along its border with the Gaza Strip has triggered a crisis between Cairo and Hamas.
Hamas leaders believe that the wall is being constructed as part of Egyptian President Hosni Mubarak’s desire to punish the Islamist movement for its refusal to sign an Egyptian-engineered “reconciliation accord” with Fatah several weeks ago.
Moreover, Hamas believes that Mubarak is also seeking “revenge” because the movement has preferred German mediation to Egyptian involvement in the negotiations with Israel over the release of IDF soldier Gilad Schalit.
In both cases, Mubarak felt humiliated by Hamas’s actions.
In assuming the role of mediator between Hamas and Fatah, Mubarak was hoping to succeed where other Arabs, specifically the Saudis, Yeminis and Qataris, had failed.
Just when the two sides appeared to be on the verge of signing a “reconciliation agreement” under the auspices of the Egyptians last October, Hamas bolted. Hamas justified its decision to stay away from the signing ceremony by citing Palestinian Authority President Mahmoud Abbas’s failure to support a resolution at the United Nations in favor of the Goldstone Report into Operation Cast Lead.
Hamas’s decision not to sign the accord with Fatah was seen by Palestinians and Egyptians as a severe blow to Mubarak’s personal prestige and Egypt’s standing in the Arab world. Mubarak was hoping that the agreement would help Egypt restore its long-lost status as one of the most influential Arab countries.
On the personal level, he was hoping that success in resolving the Hamas-Fatah crisis would reaffirm his standing as a powerful and historic leader, thus improving the prospects of his son, Jamal, to succeed him.
Read it all here.