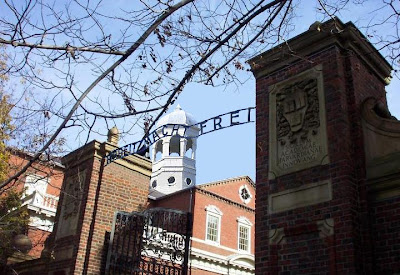 The West is repeating the same mistakes
Barry Rubin: “Yet the greatest threat to the West of all is the mistaken belief that if we are really polite and avoid giving offense, that if we make concessions or work really hard we will be free of their threat. We have set up our own signs at the entrances to our universities and foreign ministries that are the precise equivalent of Arbeit macht frei.”

The theft and then recovery of the famous sign at the entrance of Auschwitz-Arbeit macht frei, work will make you free-has brought that artifact of the Holocaust to international attention once again. Merely dismissing the sign as “cynical,” few understand the meaning of the sign in context and its underlying implications for Jewish thought and Israel today.
At the time–and this was very clear in Eastern European towns like that of my grandparents in Poland– Jews were used by the Germans for forced labor. While many were involved in road repair (an extremely important task during the war when highways were heavily used by the Nazis for military purposes), tree cutting, or other manual labor, others labored in their usual professions.
The Germans, of course, wanted to win the war, which they were waging, despite their victories, against difficult odds. Even after the French were defeated and the British retreated across the Channel, the combat was ferocious against the Soviets and the United Kingdom fought on. In pragmatic terms, the Germans needed Jewish labor. After all, too, they could hardly be receiving it under better circumstances. The Jews were not paid for the work, they were denied consumer goods, and their food rations were minimal.
Read it all here.