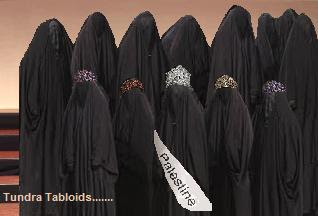 The main prize for the lucky lass, is a trip to that former Christian land and present day bastion of anti-Israel hatred, Turkey! All five finalists are guaranteed a year free of beatings. KGS

Hamas has come out strongly against a plan to hold the first Miss Palestine beauty pageant in the West Bank on December 26. Fifty-eight young Palestinian women will participate in the contest, the first of its kind since the establishment of the Palestinian Authority more than 15 years ago.
The winner will be picked by a panel that includes officials from the PA Ministry of Information and the Ministry of Culture. The winner will receive a new car, a week-long trip to Turkey and NIS 10,000.
Salwa Yusef, director of Moda Trip, the organization that is holding the Miss Palestine contest, said that the event would take place despite the pressure and threats by Hamas.
“We will hold the contest unless the Palestinian Authority decides otherwise,” she said. “We call on all those who are attacking us to give us a chance because we are seeking to send a message of civilization to the world.”
The names of the candidates have not been made public to avoid exposing them to threats. The women participating in the historic event are from the West Bank and Israeli-Arab communities. The 58 contestants, aged 18-22, were chosen from 200 women who presented their candidacy.
Apart from Hamas, several other radical groups have strongly condemned the planned beauty contest as a violation of Islamic belief, urging the PA to cancel it.