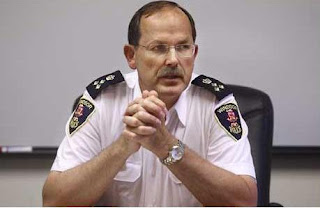 Oh I’m so, so sorry for violating your special rights
This is a classic case of Islamic values, specifically, sharia law, being accepted by non-Muslims. It’s clear that the police officer did nothing wrong, but yet, the Windsor police chief is offering an apology for the proper conduct of one of his police officers. Remember folks, this was done in the aftermath of raid on people associated with the mosque that was raided by the FBI in Detroit, Michigan, a couple of weeks ago which ended in the shootout and the killing of one of the suspects on the wanted list.
It should never have been a question as to whether the officer acted properly “in this circumstance”, because under the law, all people are to be treated in the exact same manner, there is no special treatment for particular groups. The situation warranted frisking all of the suspects, and in the West, police officers frisk both sexes, at least up till now….in Canada.

This is a prime example of sharia based prinicples being accepted by non-Muslim law enforcement officials in the West, and it needs to be rebuked and condemned in no uncertain terms. The Windsor Chief of Police should be forced to take back his apology and insist that his police officers acted correctly and will continue to frisk all suspects regardless of gender. KGS

“A police union official told reporters that the officers involved in the raid acted appropriately, according to Canadian media reports.”

H/T: Esther from Islam in Europe

Windsor Police Chief Gary Smith publicly apologized to the Muslim community this week after one of his officers allegedly patted down the wife of a suspect during a raid tied to a case in metro Detroit that ended in the shooting death of an Islamic leader.
“The actions taken did cause embarrassment and did offend their religious beliefs,” Smith said in a statement. “I sincerely apologize to the families and the Islamic community.”
Windsor police assisted other Canadian law enforcement in an Oct. 31 raid to apprehend Windsor residents Mohammad Al-Sahli, 33, and Yassir Ali Khan, 30. Federal authorities said they were part of a radical Muslim group based in Detroit that was led by Luqman Ameen Abdullah, killed by FBI agents in a shootout during an Oct. 28 raid in Dearborn.
Federal officials also say the group was involved stolen goods; family members and attorneys strongly deny both claims. Several other men in metro Detroit were arrested during raids in Detroit and Dearborn.
Khan’s wife, Hiba Khan, was patted down by a male Windsor police officer during the raid, said Patrick Ducharme, the lawyer for the two suspects. Ducharme welcomed Smith’s apology.
“I think it was a classy move,” Ducharme told the Free Press today.
Ducharme said he was on the phone with Hiba Khan as officers were in their home during the raid.
“She said, ‘He’s going down my body with his hands’’’ on the outside of her clothing, Ducharme said.
Ducharme said that the pat down was unnecessary because Hiba was not being arrested. He added that if a patdown is to happen on a woman, a woman police officer should do it, especially if the subject is Muslim. Some Muslim women say their religion doesn’t allow them to make physical contact with men outside their family.

”This is not just about Muslim women,” he said. “This is about all women. They should not be searched by an officer of the same sex.”