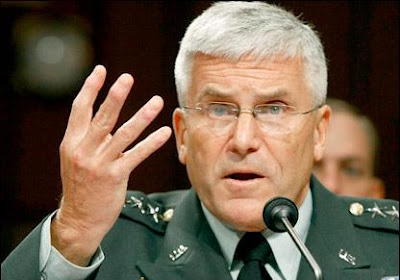 Gen.George Casey:
Besides, I have four stars and I want to keep them

THE GUY WAS PASSING OUT KORANS, SUPPORTED SUICIDE BOMBERS AND SHOUTED ALLAHU AHKBAR AS HE WAS BUSY SHOOTING UP 44 PEOPLE, KILLING 13 OF THEM! WHAT ELSE DO THEY NEED TO CONSIDER IT AN ACT OF ISLAMIC TERRORISM, A TAPED VIDEO OF HASAN WITH A KORAN IN HIS HAND AND AN M-16?
What’s it going to take for these people to wake up and smell the coffee? They are so far up to their necks with this politically correct nonsense, that they can’t turn back, they have to keep pretending that the danger doesn’t exist. Mark the Tundra Tabloids’ words, they will find this guy crazy no matter what, and expunge from the record from any mention of Islam or Muslim. KGS
NOTE: The Tundra Tabloids has a natural inclination not to trust anyone who looks like Phil Donahue 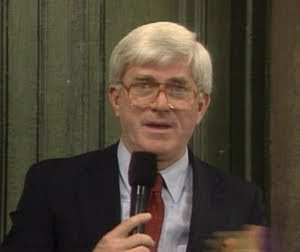 Far Lefty Phil:
I wouldn’t mention Islam or Muslim either

“WASHINGTON (al-AP) – The Army chief of staff says it’s important for the country not to get caught up in speculation about the Muslim faith of the alleged Fort Hood gunman.
Gen. George Casey says he’s instructed his commanders to be on the lookout for that reaction to the killings at the Texas post.
He says focusing on the Islamic roots of the suspected shooter, Maj. Nidal Malik Hasan (nih-DAHL’ mah-LEEK’ hah-SAHN’), could “heighten the backlash” against all Muslims in the military.
Casey says diversity in the military “gives us strength.”
Casey declined to answer questions about the investigation into the shooting, but said evidence to this point shows that Hasan acted alone. He toured Fort Hood on Friday with Army Secretary John McHugh.”
Yeah, that’s right stupid, no sense getting caught up in that messy business of truth, and protecting the American public. This ignoramus should be demoted to buck private and set to peeling a mound of potatoes. Or do they do that anymore? KGS