Jews and Christians don’t hand out death contracts,
just the al-Dons within the Muslim Mafia do
DHIMMITUDE 101

There’s a scene in the Martin Himmel documentary, “Jenin, a Massacre of Truth” where the film director asks the head of British Cartoon Society -who bestowed the grand prize to a cartoonist whose drawing depicted Ariel Sharon eating Palestinian babies- to explain why there are no cartoons of Arab leaders seen eating Jewish children: “Jews don’t issue fatwas [of death] against journalists”.

That’s the sole reason why Roland Emmerich’s upcoming global disaster movie ignores Mecca altogether, choosing rather to forgo all the brouhaha and let other religions take a hit instead. It’s a disgusting display of Political Correctness, as well as a dhimmi-like attitude of subservience to the Ideology of Eternal Outrage (IEO). When it comes to seething and  bursts of outrage, the followers of the desert madman have no equal, they’ll fill the streets in a Mecca minute, spitting and howling in the light of their crescent shaped moon. KGS
THE ONE THAT GOT AWAY 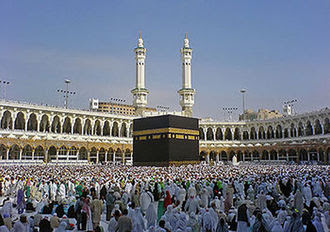 What even Roland Emmerich won’t destroy: an Islamic landmark
In Roland Emmerich’s upcoming global demolition derby movie 2012, the director gets to indulge his passion for destroying landmarks on a world scale.
In previous movies, he’s destroyed the Empire State Building and the White House (Independence Day), sent a giant monster into the middle of Manhattan (Godzilla), blown away the famous Hollywood sign and the Capitol Records building in Los Angeles (The Day After Tomorrow) and savaged New York again by flooding and then freezing it (also The Day After Tomorrow).
In 2012, he takes on landmarks in Rome, Rio de Janeiro and, yes, Washington, but there is one place even he couldn’t bring himself to obliterate. We caught up with Emmerich in Jackson Hole, Wyo., where he told us why he chose various landmarks to lay waste in 2012, and about the one that got away.
“I always like I think when it feels very new and original,” Emmerich said, adding: “Landmarks are always symbols, just symbols. … They stand for something.”
101 Tower in Taipei, the world’s tallest building (pictured below).
But Emmerich was thinking of something even more explosive: the Kaaba, the cube-shaped building at the heart of Mecca, the focus of prayers and the Islamic pilgrimage called the Hajj; it is one of Islam’s holiest sites.
Really?
“Well, I wanted to do that, I have to admit,” Emmerich says. “But my co-writer Harald said I will not have a fatwa on my head because of a movie. And he was right. … We have to all … in the Western world … think about this. You can actually … let … Christian symbols fall apart, but if you would do this with [an] Arab symbol, you would have … a fatwa, and that sounds a little bit like what the state of this world is. So it’s just something which I kind of didn’t [think] was [an] important element, anyway, in the film, so I kind of left it out.”
Gross display of dhimmitude, and the Muslims are pleased.