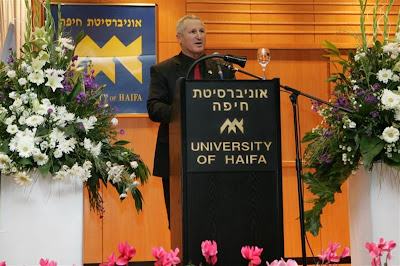 Yossi Ben-Artzi:
Don’t do it.
The following came to the Tundra Tabloids in an email from Israel, concerning the rector of Haifa university appealing to the common sense of NTNU Rector, Torbjørn Digernes, to withdraw a boycott measure. Here is what Haifa university Rector, Yossi Ben-Artzi, had to say. KGS
Rector to rector: University of Haifa turns to
Trondheim University to withdraw boycott motion
Rector of the University of Haifa, Prof. Yossi Ben-Artzi, has approached his counterpart at the Trondheim university – the Norwegian University of Science and Technology (NTNU) – upon hearing of a resolution to declare an academic boycott on Israel. The motion is supposedly to be voted upon at the Norwegian institution’s upcoming meeting of the Board of Governors. Prof. Ben-Artzi asked that Rector Torbjørn Digernes promptly withdraw the proposal prior to inclusion in the agenda for his university’s board meeting.
“Academic boycott serves only to harm academic freedom, impede intellectual advancement, and offend universal values,” said Prof. Ben-Artzi. He added that “Israel is an enlightened country and the move for a boycott of Israel is clearly based on misinformation and misrepresentation. Israel’s universities are of the most active in international research and shared academic endeavors – the results of which are renowned. The University of Haifa, in particular, is carrying out innovative research in conjunction with Norwegian scientists in various fields. I hope that NTNU will promptly reconsider the boycott motion.”