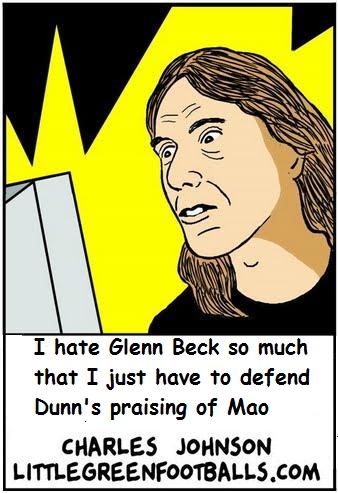 CJ: “As Glenn Beck does his best impression of Joseph McCarthy and tries to get White House Communications Director Anita Dunn hounded out of office for quoting Mao Zedong in a speech at St. Andrews Episcopal School, all I can say is, “Uh oh.”
So there it is. Equating Beck with the late Sen.Joe McCarthy, Charles Johnson hopes to peal back the layers of Glenn Beck’s onioned agenda, to reveal the real man. So what does he use to do it?

Finding conservatives who have used the familiar Mao quote used by Anita Dunn, in a bam, zing, zowie gotcha ya moment! But first, lets go to the video tape of Glenn Beck’s broadcast about Anita Dunn, made available at Michelle Malkin’s blog.

Now after viewing the video, you’ll notice that Anita Dunn was not just quoting Mao, at least not in the way the others -mentioned by LGF- were quoting him. No, Anita Dunn was not only quoting him, she was honouring him, Mao Tse Tung, as one of her two most favorite political philosophers.

Anita Dunn: “…and the third lesson and tip comes from two of my favorite political philosphers. Mao Tse Tung and Mother Teresa, not always coupled with each other, but the two people I turn to most to basically deliver a simple point, you’re going to make choices, you’re going to challenge and say why not. You’re going to figure out how to do things that have never been done before. But here’s the deal, here are your choices, they are no one elses.

So here, once again, Charles Johnson, is caught taking a situation out of the proper context and using it as means to demonize an opponent. How predictable. What a loon.  KGS