Skip to content
Home
/
2009
/
October
/
16
/
Czech Republic
/
THE TUNDRA TABLOIDS RAISES ITS GLASS TO VACLAV KLAUS: KEEP YOUR PEN IN YOUR POCKET KLAUS……!
Facebook
Twitter
Google+
LinkedIn
Pinterest
He holds the future
of European democracy in his hands 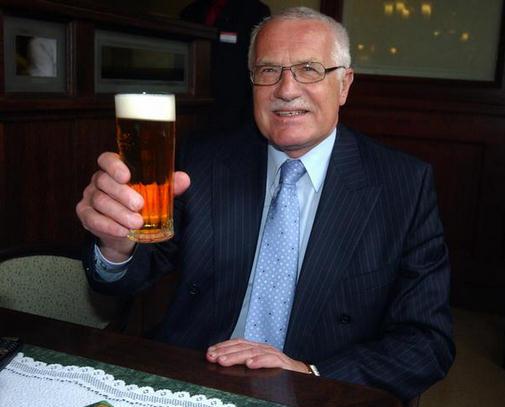 Waiting on the British?
The Tundra Tabloids has been long on record as being totally against a supra-state Europe, something of which, by the way, was promised never to takes place. The main drivers behind the EU project of course had this grand scheme in the works early on, and now we are seeing the ground work they laid over the decades finally bearing its rotten fruit.
Anyone with an ounce of common sense in their heads know that the dusted off EU consititution (Lisbon Treaty) is bad news, because it hands an already undemocratic entity even more power, something of which they have proven themselves to be untrustworthy with over the years. The people are already serving the EU state, with over 75% of the legislation being passed in the parlaiments of the member states, having orginiated in Brussels.
No one knows for sure who works in the myriad of “working groups” that draft legislation to be approved by the EU commission, no one votes for them, or for the commisars as well. The only EU politcians Europeans are allowed to vote for, are MEP’s, who cannot craft any legislation themselves, and the only defeat of legislation by these MEP’s just sends the legislation back to the Commission for modification, not the circular file.
So here’s some interesting commentary about the high expectations Tom Utley has for the defeat of the EU constitution (Lisbon Treaty) by Vaclav Klaus and the British Tories. The TT can only hope that either of these two, have the courage and tenacity to stand for democracy and to stand up to Brussels and say NO. KGS

My new hero… old what’s-his- name, the grumpy grandad with a bristly moustache whose stubborn streak might just save Britain

Though the regulars at my local don’t mention it much, or indeed at all, this is an extraordinary moment in the history of European civilisation. For since last weekend, the fate of 27 of the world’s most highly developed nation states, with a combined population of 500million souls, has rested in the hands of a single individual.

With one stroke of his pen, quite literally, this man has it in his power to decide how much control you and I, our children and grandchildren will have over the way we’re governed as the 21st century unfolds.

So who is this new Caesar Augustus – this latter-day Charlemagne, Bonaparte and Bismarck, all rolled into one – upon whose whim depends the destiny of everyone from the olive-growers of Mount Olympus to the bonus-hungry bankers of the Square Mile and the quarrymen of Connemara?

If my guess is right, less than a quarter of one per cent of those half-billion souls whose future he will determine have so much as come across his name.

Still fewer outside his own country would recognise him if he happened to sit opposite them on the bus.
To be perfectly honest, his name had slipped my mind before I sat down to write this article – and if I’d seen a photograph of him before I Googled him yesterday morning, it hadn’t registered.

But I’ve printed it out from the internet and I have it before me now, taped to my office wall in a place of honour, where it will remain for as long as he keeps his fateful pen in his pocket.

Ladies and gentlemen, allow me to present my new hero. He is Vaclav Klaus, President of the Czech Republic – and since Saturday, when Poland finally signed away its right to self-determination, his has been the one signature missing from the bottom of the Lisbon Treaty.

So he alone stands between the teeming masses of the European Union and their subjection to the new, undemocratic superstate which would be conjured into being by his autograph. So far, he’s digging in his heels and refusing to sign, as the entire Eurocracy lays siege to his medieval fastness of Prague Castle, where the Habsburg Holy Roman Emperors ruled before him.

Judging by his photograph, I must admit that Klaus cuts an unlikely figure as an historic superhero, with the future of our continent at his command. A balding, 68-year-old grandfather with a bristly white moustache, he has the look of a trade union leader, or perhaps the manager of a Midlands engineering firm.

In fact, he was an academic before he entered politics – an economist, with an admiration he shared with Margaret Thatcher for the free-market ideas of Friedrich Hayek and Milton Friedman. That in itself tells us a great deal about his independence of mind. After all, Thatcherite economists were hardly two-a-penny in the Communist Czechoslovakia in which he grew up.

We can see that same refusal to follow the herd in his outspoken opposition to theories about man-made climate change. ‘Global warming is a false myth,’ he says, ‘and every serious person and scientist says so.’

Certainly, you can hear that same view expressed in every saloon bar down my way. But how many heads of state have the strength of mind to hold out against the hectoring of the multi-billion dollar climate change industry?

Indeed, if we didn’t already know it, we might have guessed from Klaus’s photograph – the squareness of his jaw and the thick set of his neck – that here is a man with a rich vein of stubbornness in him.

But, boy, will he need every ounce of it if he’s going to carry on ignoring the threats and blandishments of the Brussels bureaucrats and their gofers in the cabinets of Europe (including Klaus’s own Europhile Government, led by a Prime Minister who says it would be ‘completely unimaginable’ to have to reopen negotiations on the new constitution eight years after they began).

This week, European Commission President Jose Manuel Barroso could barely contain his rage as he laid into the Czech President.

‘After the resounding “yes” vote in the Irish referendum,’ he spluttered, ‘the democratic decision approving the Lisbon Treaty has now been taken in all 27 member states . . . It makes no sense to reopen the ratification process. It would be completely absurd. It would be surreal.’

Just hold on there, Jose. The ‘democratic decision’ to ratify the treaty? I don’t remember anyone asking me or my fellow British voters what we thought of Lisbon – although I do distinctly remember the Labour Party categorically promising us a referendum at the last General Election.

Nor do I remember Brussels attaching much weight to ‘democratic decisions’ when the people of the Netherlands, France and Ireland (the first time) voted No to the constitution it contains.

Indeed, wasn’t there something decidedly ‘surreal’ about the way the Eurocrats set about defying the clearly expressed will of the people – just changing a word here and there, pretending they’d drafted an entirely new document – and then telling the Irish to go on voting until they gave the answer Brussels wanted to hear?

But that’s the thing about the Europhile mentality: where expanding the powers of the superstate is concerned, nothing is ‘completely unimaginable’. But when it comes to reining them back, everything is.

So the question now, upon which the hopes of all Eurosceptics depend, is how long is President Klaus prepared to hold out against signing Lisbon – and how deeprooted are his objections to the treaty?