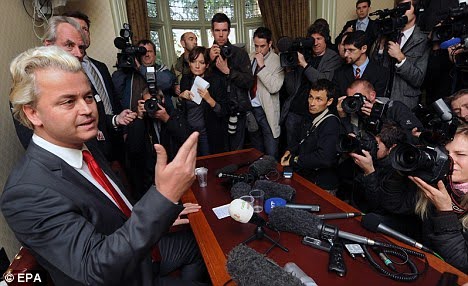 GEERT WILDERS: ISLAM IS FASCISM
AND HOW THE ISLAMONAZIS SEETHE IN ANGER! They can’t stand it that the truth teller is in town to pull the prayer rug out from underneath them as their butts point up to Allah. 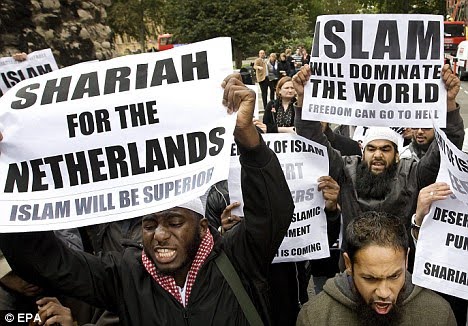 “The brothers” all in a tizzy!
After being wrongfully denied entry into the UK, Dutch MP, Geert Wilders lands in Britain to a roaring mob of seething losers, the Nazis of our time, “Da Brothers” from the desert ideology of perpetual outrage, Islam. KGS
Far-right Dutch MP Geert Wilders jets into Britain and declares Islam ‘a bad religion’
Far-right Dutch politician Geert Wilders sparked angry protests today as he declared that Islamic culture is inferior to Christianity. The MP was met by angry Muslim protesters when he arrived in the UK after winning a court battle to enter the country.
Around 40 demonstrators gathered near the Houses of Parliament as Mr Wilders, whose film Fitna criticises the Koran as a ‘fascist book’, arrived in central London. Brandishing banners saying ‘Sharia is the solution, freedom go to hell’ and ‘Geert Wilders deserves Islamic punishment’, the protesters were held back by police.
It was feared that his outspoken views on Islam could spark religious violence, but this was rejected by the Asylum and Immigration Tribunal on Tuesday.
Lord Pearson, who invited the leader of the Dutch Freedom Party to the UK, said his arrival was ‘a celebration of the victory of freedom of speech over those who would prevent it in this country, particularly the Islamists, the violent Jihadists who are on the march across the world and in the UK.’
Mr Wilders denied responsibility for the publicity which has greeted his visit. The 46-year-old said: ‘If anybody has responsibility for this publicity it is the UK Government and the Home Secretary and not Geert Wilders.’
The controversial politician will come under keen scrutiny by the Home Office during his visit. Wilders, head of the Freedom Party, is not planning to show Fitna while he is in the UK. A Home Office spokesman said the original ban was the ‘right decision’ at the time.
The Government may appeal against the Asylum and Immigration Tribunal ruling that Mr Wilders should not have been barred entry. The spokesman added: ‘Any European visitor’s right to enter the UK will be considered on its merits by an immigration officer.
Read more: